Start a Wiki
watch 02:09
'Grimm' Profile: Frederick Renard
Do you like this video?

King Frederick Renard was the father of Sean and Eric Renard, and the uncle of Viktor von Konigsburg. He first appeared in "Nobody Knows the Trubel I've Seen".

He surprised Viktor at the Kronenberg Castle and not-so-subtly pointed out that he was not that close to finding out who killed his son, Eric Renard, nor close to finding the child. He asked Viktor if it was known which of his sons was the father of Adalind's baby, which Viktor said they couldn't be sure of until they had the baby. He then told Viktor that the baby must be raised in Royalty; otherwise, the family would one day fall. He then said that "bloody changes would be made" before he allowed anything like that to happen, but he added that he trusted Viktor would succeed and told him not to worry.

He greeted Adalind Schade and informed her that Viktor was leaving. He told her that she would be staying in Portland and that she was far too important to be left alone, adding that another member of the Royal family would be with her soon. Although he was not happy about the baby being with the Resistance, he disapproved of Viktor putting Adalind in the dungeon ("Octopus Head") and reassured her that her baby would be back "where she belongs" because she had Royal blood.

Kenneth brought Diana and Juliette to a rented gated compound where Frederick was. He could hardly believe seeing Diana and marveled at how much Diana had grown. Kenneth introduced him to Juliette, who Frederick thanked and told that a new life awaited her in Vienna. He then beckoned Diana over to him and hugged her, saying that she was now where she belonged. Rispoli then called Kenneth, and Frederick told him to put the call on speaker so he could be a part of their celebration. However, Rispoli broke the bad news that the Grimm got away, and Frederick ordered Kenneth to go do his job while Juliette stayed in the rental compound. After Kenneth left, he asked Juliette what Nick was like, and she responded, "He won't stop."

A little while later, Frederick spoke with Juliette about how difficult it must have been for her life to have suddenly changed so drastically and that she must have truly loved Nick, given all she sacrificed. Juliette replied that she wasn't so sure now that it was a sacrifice. Frederick said that a Hexenbiest with the kind of power that Juliette had would be a very valuable asset to someone who respected them, adding that his family had a long history with Hexenbiests and have always embraced what they were burned at the stake for. He said it must have been confusing for her to now be a Hexenbiest, not having been born one, and Juliette brought up how he tried to have his son, Sean, and his mother killed, but Frederick said that was the Queen's doing. Juliette woged to reinforce the point that they shouldn't attempt to kill her, but Frederick reassured her that the Queen was dead. Frederick then told Juliette, still woged, that she was beautiful.

Rispoli later arrived at the compound at told Frederick that Kenneth had been arrested at the hotel and that he was set up by the Grimm. Kenneth told Rispoli to let the Grimm have him and that they both needed "closure." He then told Rispoli to get ready to leave.

As Juliette looked on, Frederick played with Diana and built a castle out of some blocks, which she knocked over. Diana then used her telekinetic to build a larger castle with all the blocks, prompting an impressed Frederick to say that she would be the builder of kingdoms. A guard then entered the room and informed Frederick that the helicopter pilot reported being five minutes away. They all then got ready to leave.

As Rispoli, Frederick, Juliette, and Diana walked to the helicopter, they heard a gunshot from inside the compound. Rispoli went to head back inside, and Frederick told him that they were leaving.

In the helicopter with Diana, Frederick told her that they were headed to a big ship that would take them across the ocean back home. Diana then pointed at the window next to Frederick, who turned to look and saw his reflection turn to a skull. He looked back at Diana, whose eyes were woged purple. The helicopter pilot then got out of his seat and climbed back to where Frederick was sitting. As he opened the helicopter door and cut Frederick's seat belt, Frederick demanded him to get his hands off him and said, "I am the King!" The pilot then threw him out of the helicopter as Frederick screamed.

Meisner came to Renard and told him that Viktor struck a deal with the Resistance to have Frederick killed because he was upset that Frederick replaced him with Kenneth. ("Lost Boys") 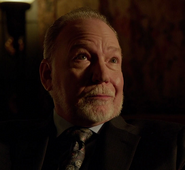 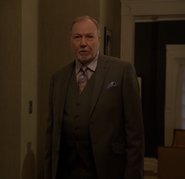 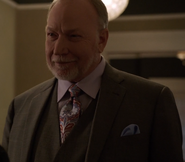 Retrieved from "https://grimm.fandom.com/wiki/Frederick_Renard?oldid=201931"
Community content is available under CC-BY-SA unless otherwise noted.