Frau Pech was a Hexenbiest who first appeared in "Mr. Sandman".

Frau Pech arrived at Adalind's apartment in Vienna in the middle of night and commanded that she come with her to visit Stefania Vaduva Popescu, the Zigeunersprache of the Schwarzwald gypsies.

Frau Pech and Adalind arrived at the gypsy camp, where she and Stefania exchanged verbal barbs. Pech assisted Stefania in preparing the tools needed to test the blood of Adalind's baby.

After the baby's bloodline was confirmed, Stefania offered a price, to which Frau Pech scoffed and said they could do better on the open market in Budapest. Adalind interrupted and said that the price for her baby was the restoration of her powers.

Frau Pech was spying on Adalind and saw Stefania leaving her hotel room. While Adalind was waiting to meet someone at a restaurant, Frau Pech arrived, sat down, and warned Adalind about Stefania and not to let her womb become her tomb. She then went to meet Renard's Confidant and told him that someone outside the family was carrying Royal blood and that the child may be for sale.

Frau Pech mixed up an ingredient and gave it to a man to put inside Adalind's food; once she passed out, Pech used a potion to transform herself into Adalind. Right on cue, Stefania called and asked for a meeting. "Adalind" visited the gypsy queen, who told her the plan to get rid of Frau Pech: Stefania would pretend to double-cross Adalind, and when Frau Pech arrived to negotiate, one of her sons would garrote her so that her heart could be taken and used to restore Adalind's powers. Incredulous, Frau Pech asked if that would really work, to which Stefania replied that they'd find out. At that moment, one of her sons immediately garroted Frau Pech. Stefania knew who she really was all along. Stefania stabbed the elder Hexenbiest in the stomach and prepared to cut her heart out.

Her body, with the heart removed through a slit cut from her stomach to her throat, was lying on the floor of Stefania's abode. Adalind was summoned, and she cut off Frau Pech's hands and feet and plucked out her eyes. 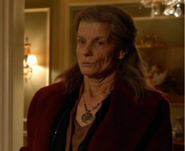 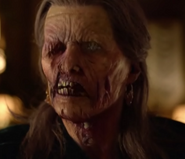