A Folterseele (FOHL-tuh-zay-luh; Ger. Folter "torture" + Seele "soul") is a frog-like Wesen that was seen in "Heartbreaker".

Folterseele are known for being always beautiful, yet always deadly. They do not woge like any other Wesen; they only woge as a defense mechanism when someone is sexually attracted to them. They secrete batrachotoxins from their skin, which is most closely related to that of the Golden poison frog (Phyllobates terribilis). Any contact with this toxin is extremely lethal, and as little as one ounce is enough to kill 10,000 mice, 10 to 20 humans, and 2 African bull elephants. The toxin induces acute systolic heart failure. Due to this defense mechanism, they are a rare Wesen.

When they woge, they gain a frog-like appearance in which their skin turns a yellowish to brownish-green color, their eyes slightly bulge and move slightly further apart, their nose bridge flattens, and their mouth and lips widen. The lower jawbone is reduced to just the lower lip, and the throat becomes an inflatable vocal sac.

One way to neutralize the secretion of a Folterseele's batrachotoxins is to depolarize the cell membranes by using a tetrodotoxin or saxitoxin. These neurotoxins actually have an antagonistic effect on the secretion of the batrachotoxin in the first place, totally blocking the creation of the poison. A side effect of this treatment, however, is that the Folterseele's greenish skin color becomes partially visible to all, particularly in the area of the face, and is left with a dry, almost scaly-looking appearance. No other characteristic of a Folterseele when woged becomes visible, however.

Many men have difficulty controlling themselves around a female Folterseele, and they have a higher risk of being the target of rape attempts. Because of this and what happens to those who contact them when they woge, Folterseele mostly keep to themselves and avoid romantic relationships. Some go so far as to disfigure their faces to make themselves less attractive, but they also struggle with never being able to experience love. 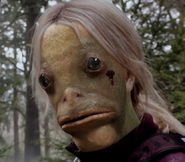 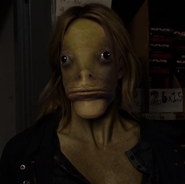 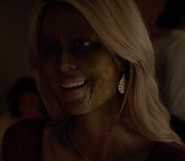 Tetrodotoxin mixture that blocks a Folterseele's toxic secretions
Add a photo to this gallery
Retrieved from "https://grimm.fandom.com/wiki/Folterseele?oldid=175862"
Community content is available under CC-BY-SA unless otherwise noted.