Farley Kolt is a Steinadler who appeared in "Three Coins in a Fuchsbau".

He tricked two Schakals, Ian Flynn and Hans Roth, into shooting each other in the dark. He searched for the Coins of Zakynthos but realized they were not with the men or at their hideout, so he stayed and waited until Soledad Marquesa returned. Marquesa eventually did return and recognized Kolt as well, mentioning that he thought he had seen him in Lisbon. Knowing that Kolt was searching for the coins, he told him that the coins were not there. Kolt told him that he had figured that out and asked him where they were. Marquesa said he wouldn't have come back to the hideout if he knew, but Kolt wasn't totally convinced and had him lay face down on the floor. He then implicitly revealed that he had been following Marquesa and asked him what they were doing in Portland. Marquesa told him that a jeweler, Sam Bertram, had the coins and said that he wouldn't have gone back to the store if he knew where they were, adding that when he got there, the police were all over the place. Marquesa then lost his temper and woged to attack Kolt, but Kolt noticed the police approaching the hideout and informed Marquesa, not looking nearly as concerned as Marquesa was with this revelation. Kolt already had his hands up in the air as Hank and Nick entered, but Hank, influenced by the effect of the coins he had with him, aggressively shoved Kolt against a wall and started hitting him in the face. He then threw him to the ground as Nick attempted to settle Hank down. As Nick was handcuffing Kolt, he turned his head to face Nick and woged, realizing Nick was a Grimm. Nick and Hank then took Kolt back to the precinct, where Hank not-so-gently put him into an interrogation room.

Nick later entered the room and began to interview him. Kolt admitted his surprise that Nick was a Grimm, though he wasn't concerned nor fearful of him. He added that ballistics would prove the two men found dead at the hideout shot each other. Kolt then gave Nick some information about the two men, including their nationality and that they worked for Marquesa, who Kolt was following. When Nick asked him why he was following him, Kolt made sure that their conversation wasn't being recorded and then informed Nick that he was in Portland because of a Grimm and that Nick wasn't the only Grimm he had ever known. Nick then asked him about the coins, and Kolt proceeded to tell him that they were priceless and that many people had died because of them.

Nick pressed for further details about the coins, and Kolt then told him that the history behind them started in the eight century B.C. when gold was being mined on the Ancient Greek island of Zakynthos. He said that certain coins from the mine were stamped, one side with a swastika, which symbolized good fortune, and the other side with the head of the Nemean lion, which symbolized wealth and power. He added that the Nemean lion had been slain by Heracles, who had golden fur that was impervious to attacks and claws that could cut through armor and were sharper than mortal swords. He described that those in possession of the coins had a charismatic influence over other men, but that the coins also had a devastating effect on whoever had them. He detailed to Nick the timeline of those who had the coins, stating that when the Greek empire fell, the coins came to be in possession of the Romans and went from Claudius to Caligula, to Nero, to China and the Han dynasty before disappearing for several centuries and reappearing in Nazi Germany. Kolt stated that the coins' whereabouts went unknown once again when the Nazis were defeated and that only a handful of Grimms knew where they were, adding that Grimms are not as easily affected by the coins as most people. He said that the Grimms took great care to protect the coins until they went back into circulation about 18 years ago when the Grimm that was protecting them at the time was found and killed. When Nick asked who the Grimm was that got murdered, Kolt unwittingly told him about his relationship with Nick's aunt, Marie Kessler, saying that he was in love with her but that she left him to take care of her sister's son when her sister was killed. Nick asked where this had happened, and he replied that it occurred in Rhinebeck, New York. He then unsuccessfully tried to persuade Nick to release him by wogeing into a Steinadler and telling him he needed his help to find the coins.

Now locked up in a holding cell, Nick paid Kolt a visit and asked him for the name of the woman he was in love with in Rhinebeck. Kolt was pleased that Nick had checked the validity of his story and told him that the woman he knew was Marie Kessler. He said that they were engaged and that neither side of the family had been happy about it. It then dawned on Kolt that Nick knew Marie, and when Nick told him that she was his aunt, he realized that he was the nephew of Marie who she had to raise. Kolt asked Nick if she was dead, and Nick confirmed she died four months ago. He told Nick he was sorry for his loss and wished he could have seen her one more time. Kolt asked Nick if he was still trying to figure out if he could be trusted and reiterated that he could help Nick, as he then told him how Soledad Marques had been one of the many men involved in killing Nick's parents.

Nick told Kolt the news he got from Hank over the phone that Marques killed a police officer and took his uniform, and when Kolt told Nick that that meant Soledad was there at the precinct, it was enough to finally convince Nick to let him out of his cell. Nick and Kolt then went into Renard's office, where Hank was looking for the coins, but Kolt told him they wouldn't find them in there. Hank asked Nick why Kolt was with him, and Nick told him that he was cleared by ballistics and could help them find Soledad because Kolt knew him. They went to the precinct parking garage to find the lights out, and Kolt told Nick and Hank that Marques was there. Nick told Kolt to stay as they went to go look for Marques. After Soledad was apprehended, however, Kolt stole the coins from Renard. Nick correctly predicted Kolt return to his hotel room to grab his suitcase though and was able to get the coins from Kolt, whose attempt at an attack was thwarted by Nick by a single punch to the face. Nick then told him that he'd never find them and to forget about them, to which Kolt replied, "Oh, I've tried." Nick then told him, "Try harder," and left.

In "Woman in Black", Kolt is mentioned by Akira Kimura to Captain Renard. Kimura met up with Kolt for three days in Los Angeles about the Coins of Zakynthos, thinking that he had them. It is unknown if Kimura kept him alive. Captain Renard advised Nick and Hank to contact the LAPD to determine if Kolt's body had been found. The results of that contact are unknown, though it should be noted that Renard doubted Kimura would have left him alive. 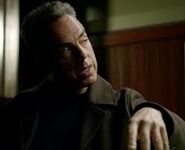 Add a photo to this gallery
Retrieved from "https://grimm.fandom.com/wiki/Farley_Kolt?oldid=176950"
Community content is available under CC-BY-SA unless otherwise noted.