Edit
watch 02:24
Wiki Targeted (Entertainment)
Do you like this video?
Play Sound
"Face Off"

"Face Off" is the thirteenth episode of Season 2 of Grimm and the thirty-fifth episode overall. It first aired on March 8, 2013 on NBC.

NICK MUST FACE THE CONSEQUENCES OF LEARNING THE TRUTH ABOUT JULIETTE -- After Nick (David Giuntoli) learns about Juliette (Bitsie Tulloch) and Captain Renard (Sasha Roiz), he must deal with the consequences. Things get even more complicated when Nick is called to investigate his own crime. Meanwhile, the search for the key intensifies as Captain Renard finds Nick's trailer and makes a surprising alliance. With Rosalee's (Bree Turner) help, Monroe (Silas Weir Mitchell) informs Nick that they might be able to stop what's going on with Renard and Juliette before it goes too far. Elsewhere, Wu (Reggie Lee) responds to a bizarre shooting at Nick and Juliette's house. Claire Coffee also stars.

At Monroe's home, Monroe, who has revealed to Nick that Captain Renard is Juliette's new love interest, is trying to convince Nick not to do anything rash when Nick's phone rings and he is called to investigate the murders of the four Hundjäger he and Monroe recently killed. ("Season of the Hexenbiest") At the scene, Nick pretends to be unaware of his involvement but drops hints all the while.

Elsewhere, Renard has discovered Nick's trailer and uses a Scharfblicke locksmith, Al, to enter. The Scharfblicke peers into the keyhole and identifies the mechanisms locking the trailer, so he pulls out a bunch of skeleton keys, picks one, and hands it to Renard, who instructs him to forget that he was even there. Inside, the key is nowhere to be found. He is then given the same phone call as Nick about the murders, and leaves Nick's trailer as it was.

At the crime scene, Nick acts as if he is unaware of Renard's involvement with Juliette, however, his interaction with the Captain is strained. The next morning, in his office at the precinct, Renard has a telephone conversation in French with his confidant in Vienna and is told that Jacques was killed earlier that morning. There is a knock at his door and he ends the call. Nick and Wu enter and Nick says they have surveillance footage from the Deluxe Hotel. Wu shows the footage to Nick and Renard. They see Monroe exit in a hurry, followed shortly after by the four murder victims, but, as Nick knows of Monroe's involvement, he misleads them by saying that the guy probably had nothing to do with the murders, and they agree with him. Renard does not mention that he also knows Monroe.  ("The Other Side") ("To Protect and Serve Man")

Monroe receives a call at home from Rosalee, and tells her about the Nick/Juliette/Renard drama and Rosalee twigs to the fact that Renard was the one who woke Juliette from her spell induced coma. ("The Kiss") She also tells Monroe that her aunt is doing much better and that she is returning home. Monroe tells her that he will meet her at the bus station in the morning.

At Juliette's home, Renard shows up to talk to Juliette, and they start making out. Nick silently creeps up on them without being seen. Monroe then calls him, and he decides to return to Monroe's house. Juliette then tries to stop, and Renard tries to make her keep going, saying he can't stop. Juliette then fires at Renard with his own gun, which he then grabs. Renard then leaves moments before a police car shows up with Wu. Nick and a few other officers show up later as well, and Nick tries to speak to Juliette about it. He says he knows who the other man is, and that he wants to deal with this.

Back at the precinct, an unidentified officer tells Adalind that she has been released. As she leaves the precinct, she is stopped by Renard, who says they need to talk. At first, Adalind refuses to go with him citing if anything happens to her, he will hear from her lawyers. However, Renard forces her to get into the car with him. She asks him if they are going to Aunt Marie's trailer to which he remains silent. Soon Renard brings her to a lonely lakeside. He asks her to "fix what's wrong with me," to which Adalind tells him, "I can't fix you, but I can make it better." She starts kissing him. She breaks off to say, "I want you. The real you. I want what you would never show to her." Renard then woges, and Adalind says, "Now we're talking," and they start kissing as they frantically remove their clothes.

The next morning Nick and Monroe meet Rosalee at the bus station, Rosalee steps off the bus and greets Monroe with a kiss. She greets Nick and then tells them they need to get to the Spice Shop right away as she thinks she knows what the problem is.

Adalind is with Renard at his home. Renard asks her if she has given any thought to what happens to him if his brother gets Nick's key. Adalind counters with the thought of what happens to her if he doesn't. Renard tells her there is still time to choose sides. To which Adalind replies that she DID choose him a long time ago, and he turned his back on her. He says he will not underestimate her again, but that she should not count on his brother for the same consideration. He then leaves, telling her to make herself at home.

At the Spice Shop, Rosalee tells Monroe and Nick that the Royal in Portland must have been the one Catherine Schade made the purification process for. ("The Kiss") Monroe then determines that Renard is the Royal in Portland. Rosalee tells them they have to figure out how to counteract the spell quickly, because if it is allowed to progress much further, one of them will kill the other. At Nick's trailer, Renard searches in vain for the key. He then recalls that while he was talking to his contact in Vienna, he saw Nick put something in his desk through his office window.

Back at the Spice Shop Monroe finds the antidote, however, it involves getting Juliette and Renard to take it together. Nick says that he will make that happen. Then Rosalee realizes that in order for that to work, they need the "instrument of original infection" ("Woman in Black") which was Adalind's cat, Majique. However, the cat was hit by a car and killed when it escaped its cage. ("Quill") When Nick asks: "So what do we do now?" Rosalee answers: "This", and hands the book to Monroe, who after reading the entry, looks at Nick in dismay and says: "Oh, dude."

At the precinct, Renard searches Nick's desk. He finds the key right before Hank, who is now recovered from being beaten, enters.

Back at the Spice Shop, Rosalee is mixing a concoction in the blender. It changes from black to blood red to white in about 10 seconds. She explains that this is the purification process that was on the list that Catherine Schade brought in. Monroe asks how bad it will be and Rosalee responds that she doesn't know, that it's going to do what it's going to do. She tells Nick that drinking it is the first step to break the spell between Juliette and Renard. She says the second step involves all three of them. Monroe snorts and says: "I can't wait to write the invitations to that party". As Nick prepares to drink the potion, his cell phone rings. Hank is calling to tell him that Renard was snooping in his desk. Nick tells Hank that he is on his way and not to let Renard leave. He tells Monroe and Rosalee that the potion will have to wait, that Renard has taken something that belongs to him.

Hank tries unsuccessfully to stall Renard, who leaves the precinct. Returning to his home, he encounters Adalind, who asks if he found the key. He lies to her and says he needs more time. Adalind tells him he is out of time and that there is a car waiting for her downstairs. She tells him she will tell his brother that he tried "...so awfully hard." She then leaves. Nick receives a call from Renard. He offers to meet up with Nick at "somewhere out of the way."

Nick drives to this location and waits for Renard. He then sees a doll on the ground and remembers that this is the cabin where the Postman from "Pilot" lived. He also recalls how the doll got there (he gunned the Postman down, and the doll landed there), when Renard arrives. He offers to talk this out with Nick, who instead punches him. A short melee fight ensues. Renard then woges in front of Nick for the first time, revealing to him his true nature. Nick is horrified, but Renard then explains that he is on Nick's side, and has known about it much longer than him. He also explains that he didn't want Marie to be killed, and that he regretted hiding it from Nick. Nick asks him about Juliette and Renard tells him that nobody wants the thing with Juliette to end more than he does. Nick says he is going to have to prove that and Renard tells him if he knew how, he would. Nick says to Renard: "I know how."

Nick and Renard show up at Juliette's door. She answers it and says, "Now what?"

Back at the Spice Shop, once again, Rosalee blends another batch of the potion taken by Renard in "The Kiss". At first Nick doesn't realize the side effects, but he then doubles over in pain. Nick then falls to to floor, groaning in agony and begins to turn red in the same manner that Renard did when he took the potion.

In Vienna, Adalind stands in a bathroom with a home pregnancy test device in her hand. The result is positive and she smiles. 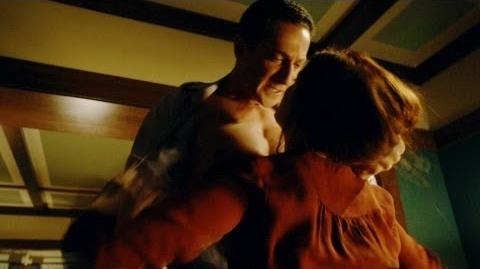