An Excandesco (eks-KAHN-dee-skoh; Lat. "catch fire") is a devil-like Wesen that was seen in "Trial by Fire". They are believed to be the basis of the phoenix.

When they woge, Excandescos take the form of a human comprised of jet black igneous rock. They have three digits on their hands and feet. By releasing large amounts of white phosphorus though their skin, Excandescos can generate intense flames. This power can be accessed regardless of if they are woged or not. Due to their nature, they possess a natural resilience to intense heat. They usually take off the majority of their clothes before they woge to avoid burning them.

Slathering their bodies while they are woged via a Super Soaker or something similar with a sticky fire retardant composed of licorice root, beeswax, witch hazel, and jojoba will prevent them from conjuring fire. Consequently, the energy will be turned inwards, causing them to explode.

Excandescos are among the most dangerous Wesen ever observed, largely because the heat they emanate makes them hard to get close to. They also seem to have a strong case of pyromania and love to commit arson. Some go so far as to make a criminal career out of it. It has been noted that they have a tendency to stick around and watch the fires that they start.

At the request of Peter and Paul, fearful for their Christian brothers, I'd spent weeks following the Excandesco thought to be the basis for the phoenix. His patron was the Emperor Nero himself, and Peter knew he was being sent to destroy Christians in the city. That night was a windy one as I followed him through the streets. He entered one of the small stores. I tried to catch up to him, but the madness had already begun. The flames spread rapidly through the narrow, twisting streets, rising and spreading to the Palatine and Caelian slopes. With nothing to stop it, the fire raged through Rome. I blame myself for not being able to stop him, for as I closed in to kill him he emitted terrible heat. I could not continue and had to fall back, my skin and scalp badly burned. There's nothing I know that can stop these devils. 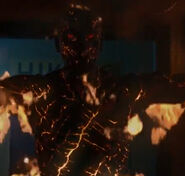 Retrieved from "https://grimm.fandom.com/wiki/Excandesco?oldid=202046"
Community content is available under CC-BY-SA unless otherwise noted.