Prince Eric Renard (1968-2013) was the half-brother of Sean Renard. An influential and powerful Royal, he was fluent in English, speaking with a British accent. He also knew French and resided in a Norman-style castle.

Eric approached a man as he was being tortured. He asked him the names of people in the Resistance. He then got a phone call from Marnassier.

Eric was in bed when Captain Renard called from Portland to ask if he was involved with sending Marnassier to the United States, chiding him for not being more discreet. Eric responded that "the family" was not as patient as Sean wanted them to be. Sean told Eric that Marnassier was dead and remarked that it didn't appear he even needed to be concerned about Eric's attempts to kill Nick, judging by the state of Marnassier.

"The Other Side"[edit | edit source]

Eric met Adalind Schade at a Viennese opera house with his bodyguards, and they began a conversation as they knew somebody in common: Eric's brother Sean. They also spoke about betrayal. Later, at Eric's castle, Eric and Adalind spoke further, and Eric revealed to her that Sean was his half-brother. Because his father had an affair with a Hexenbiest, his mother didn't want a half-Hexenbiest in the family, so Sean and his mother left Europe to escape her wrath. Then they mentioned Nick, and Eric asked Adalind how much she knew about the Grimm.

Eric spoke with Adalind and implied he would be making a trip to Portland to see his brother.

Eric was at home starting to make out with Adalind, when he received a telephone call from his father telling him to go to Portland and meet with Baron Samedi.

Eric arrived in Portland by private jet and called Sean to arrange a meeting in the near future, surprising Sean by his presence in Portland.

In his hotel room, he received Baron Samedi and embraced him.

In his hotel room, Eric and Baron Samedi continued their conversation. Eric asked him if he would show his Cracher-Mortel abilities, which the Baron was happy to display. Eric called in Lucas and had the Baron spit on him, and Eric watched the effects in amazement. He asked if Lucas was in pain and was excited when the Baron told him it was excruciating.

The next day, he called Sean and invited him for dinner. When Sean arrived, Eric let Sean pass by his guard, Carter, uncaring if he was armed. While talking with Sean, Eric didn't reveal much of his plans but quickly led the conversation to Nick, and he recounted his successes against the two Reapers, the Mauvais Dentes, and the Nuckelavee and admitted he was more capable than the families had expected. He also invited Sean back to Vienna and told him historic things were happening, and there was a spot for him in the family. Sean told him he would "think about it."

Later, Eric left to meet up with Baron Samedi, who had spit on Nick and captured him. Eric had the papers prepared to transport him to Europe. Smiling, he paraphrased Hamlet and said, "Goodnight, Sweet Grimm," as he closed the coffin.

He supervised the loading of the coffin containing Nick into Baron Samedi's van and then left for the airport to return on a different flight.

Following the orders of Sean, Eric was murdered by Meisner. The news media reported Eric's death from a car bomb in the vicinity of Vienna. A broadcast referred to him as the Crown Prince of the house of Kronenberg, and a newspaper article referred to him as Eric (Kronenberg) Renard.

The newspaper article that Meisner read was in German, which translated to English, read as follows:

Eric was a calm, sophisticated, cultured, and a very ruthless man, so much so that even other royals considered him dangerous. Although he didn't like crueler methods (or so he claimed), he was more than willing to use them to achieve his goals. His main care was his family and their position, and he was both ambitious and power hungry. Eric was very intelligent, as well as a highly feared man; even his own half-brother feared him.

Eric was highly cunning, and his plans were very complex, to the point that it often left his opponents guessing until it was too late. Eric also seemed to be something of a patriot and admired his homeland, often bringing up its successes in history. He seemed to harbor a love for classical music.

Eric had a weakness for beautiful women. 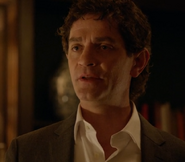 Retrieved from "https://grimm.fandom.com/wiki/Eric_Renard?oldid=181130"
Community content is available under CC-BY-SA unless otherwise noted.