The Endezeichen Grimms (EN-dits-ahy-shin; Ger. endezeichen "end sign") were the worst of the worst, a sect of merciless, intolerant Grimms devoid of any compassion whatsoever. It is said that they would roam the countryside mercilessly killing Wesen men, women, children, and even pets. It did not matter to Endezeichen Grimms if a Wesen was good or evil: in the eyes of Endezeichen Grimms, all Wesen are inhuman abominations to be eradicated. In "The Hour of Death", Monroe told Nick and Hank that he heard fairy tales of this type of Grimm while growing up but was told that, luckily, these Grimms no longer exist.

Endezeichen Grimms were known to be inhumanely brutal, torturing captive Wesen and cutting fingers, toes, arms, legs, and even genitals as grisly trophies. Their brutal tactics and indiscriminate killing of Wesen set Endezeichen Grimms apart from regular Grimms, who usually only kill evil Wesen, and even then, resort to the quickest and cleanest method. To this day, Wesen parents make sure to tell their children about Endezeichen Grimms via Albtraume fur Wesen Kinder (ALP-troi-muh fyoor VES-sin KIN-duh; Ger. "nightmares for Wesen children"), the Wesen equivalent of fairy tales.

The Sterbestunde G (shtab-uh-shtoon-duh; Ger. sterbestunde "hour of death") was their symbol, which was stylized to look like a human skull. Endezeichen Grimms branded it into every Wesen they killed and drew it with the blood of their victims on every house of every village that had Wesen in it. It was branded onto their victims with highly heated metal shaped like the Sterbestunde G.

During one case, Nick Burkhardt believed that he was dealing with an Endezeichen Grimm who tortured a Wesen responsible for an abduction in order to force a confession out of him. The "Grimm" later abducted Bud with the intention of torturing him, but the investigation revealed that the person responsible was actually Ryan Smulson, an intern at the department who turned out to be a Lebensauger attempting to act like a Grimm due to a psychotic breakdown.

Their symbol: the Sterbestunde G 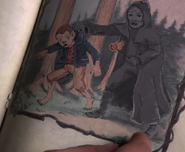 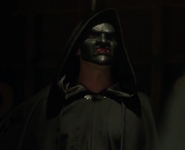 Add a photo to this gallery
Retrieved from "https://grimm.fandom.com/wiki/Endezeichen_Grimm?oldid=171963"
Community content is available under CC-BY-SA unless otherwise noted.