Tulloch was born in San Diego, California, but grew up in Spain, Uruguay, and Argentina. "Bitsie" is not a contraction of Tulloch's given name, Elizabeth, but an homage to her oddly nicknamed grandfather, a World War II bomber pilot. Her father, Andrew Tulloch, works in Latin American banking, which is why she grew up abroad. After returning to the U.S., she went to middle and high school in Bedford, New York. Tulloch graduated magna cum laude from Harvard University with a double major in English and American Literature and Visual and Environmental Studies. Tulloch is of Scottish descent on her father's side and Spanish descent on her mother's.

She stars in independent film Caroline and Jackie opposite Marguerite Moreau, which she also co-produced. The film premiered at the Tribeca Film Festival in April 2012, and was released theatrically in May, 2013.

Tulloch co-starred in the award-winning movie The Artist with Jean Dujardin, John Goodman and James Cromwell, which was released by The Weinstein Company in November 2011, and won the 2012 Academy Award for Best Picture. Tulloch was nominated for a Critics Choice Award for Best Ensemble Cast for the movie.

She was in Lakeview Terrace, directed by Neil LaBute, opposite Samuel L. Jackson, Kerry Washington, and Patrick Wilson, and worked with Barbara Hershey on a film called Uncross the Stars. In the Fall of 2009 she filmed the romantic comedy Losing Control. Tulloch voiced one of the characters in Alpha and Omega, a 3-D computer animated film, which was released in September 2010. Movies Tyranny and Riding the Pine are in pre-production.

Tulloch's first acting credit was as R2-D2's 'girlfriend' in R2-D2: Beneath the Dome, a mockumentary produced by George Lucas telling the life story of the fictional robot R2-D2 from the Star Wars film series. She starred as 'Sally' in the premiere of Sam Forman's play, Quarterlife, which opened at the Pico Playhouse in March 2006. The L.A. Times wrote, "Superbly performed...the scene at the end of the play, between Sally (Bitsie Tulloch) and Jack (Clark Freeman), was heartbreaking and beautiful...The lead actress, Bitsie Tulloch, [was] absolutely brilliant."

Tulloch played the lead role in Ed Zwick and Marshall Herskovitz's drama Quarterlife, which premiered on NBC in early 2008. While the series was quickly pulled and moved to Bravo, Tulloch was hailed for her performance. The Los Angeles Times wrote: "She's the best realized of the bunch... Tulloch, who plays her, seems destined to be better known." She was often compared to the 'next' Claire Danes: "Will this be the first online show to create a real star? It looks likely: The gorgeous 26-year-old Tulloch clearly possesses Danes-like smarts and magnetism." "If nothing else, Zwick and Herskovitz have an eye for female talent who possess that rare combination of raw acting chops and killer looks. They discovered Claire Danes ("My So-Called Life") and Evan Rachel Wood ("Once & Again"), and they might have done it again in Quarterlife with Bitsie Tulloch."

Tulloch has appeared on television shows House, Cold Case, The West Wing, Moonlight, and Outlaw. In 2007 she filmed a role as a Dharma initiative scientist for the ABC series Lost, but her role was re-cast due to scheduling conflicts with Quarterlife.

In 2009, Tulloch shot one of the 3 leads in HBO's buzzed-about comedy pilot Washingtonienne, based on the book by Jessica Cutler. The pilot was produced by HBO and Sarah Jessica Parker. In early 2010 she filmed Most Likely to Succeed, a 1/2 hour comedy pilot for Imagine Entertainment through the FOX network, and a recurring role on NBC's Outlaw.

In December 2018, she portrayed Lois Lane in two-thirds of the Arrowverse "Elseworlds" crossover, appearing in The Flash and Supergirl.

In early 2012, Tulloch was nominated by the Broadcast Film Critics Association Awards, commonly called the Critics' Choice Awards, for Best Ensemble Cast for The Artist. Tulloch was nominated for a 28th Annual LA Weekly Theater Award for her performance in Sam Forman's play, Quarterlife. (March 2007)

She and David Giuntoli are currently married. They got engaged in April 2016, but they waited until July 23 to announce their engagement at Comic Con.[1] The couple got married in June 2017 in Montana, and they made the news public on July 6, 2017.[2][3] In October 2018 they announced that they were expecting their first child in February 2019[4] and in December 2018, Bitsie revealed that they will be having a girl.[5] On February 14, 2019, Bitsie revealed that she gave birth to her and David's daughter, named Vivian.[6] 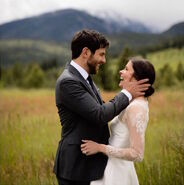