Start a Wiki
watch 02:05
'Grimm' Lore: Elizabeth Lascelles
Do you like this video?

Elizabeth Lascelles is a Hexenbiest and the mother of Sean Renard. She first appeared in "Thanks for the Memories".

Sean told Juliette that his mother had known Henrietta since Elizabeth was a child, and that Henrietta had been largely responsible for them moving to Portland.

Renard was in his office when he got a call from Elizabeth about Eric's death. She thanked him and told him it was well deserved.

She watched from outside Captain Renard's hospital room as Renard flatlined and doctors were unable to revive him.

As Captain Renard flatlined, she came into his room. The Thoracic Surgeon told her she could not come in, but her eyes turned icy blue, and she froze time. She reached into her bag and pulled out a large, writhing Two-Headed Snake that was half-black and half-red with one head on each side of its body. The black head struck over Renard's heart, and the red head of the snake bit over her heart. They stayed attached for a few moments as Renard's color returned to his body and Elizabeth's face became pale. The heads both released, and Elizabeth dropped the snake to the floor where it promptly turned to ash and dissipated. Elizabeth fell to the ground in a faint as everyone unfroze. The surgeon saw Elizabeth on the floor and asked her if she was alright as Renard suddenly gasped and woged briefly.

Later, at the hospital, Renard was lying in bed when Elizabeth entered his room. She whispered his name as he slowly opened his eyes.

Renard woke up later and spoke with Elizabeth. She asked who shot him, and he told her that it was Weston Steward, a Hundjäger working for the Royal Family. He told her he was also supposed to give something important to Nick and that he needed to speak to him. Elizabeth told him he didn't need to do anything until he got better. Renard then told her that he and Adalind had a daughter together, and Elizabeth was happy to find out she was a grandmother. She then asked when she could see her granddaughter.

That night, Elizabeth came into Renard's room while Nick and Hank were visiting, and Renard introduced everyone to each other.

Renard, resting in his hospital bed, spoke to Elizabeth about how Viktor would have killed him and her if he hadn't given his daughter, Diana, to him. Elizabeth said that she knew him better than to just give Diana to Viktor and surmised that it would have been advantageous if the Royals thought that the Resistance had her. Renard didn't say anything to this, so Elizabeth asked him if he was going to tell her where Diana really was, and Renard replied that he didn't know but that she was with someone who owed no allegiances to anyone. Monroe and Rosalee then entered the Captain's hospital room, and Renard told them to stay and introduced them to his mother. He told them that she was up to speed with what had happened to Nick, and she said that in order to help Nick, they needed to know what was in the potion. Renard said they wouldn't be able to find out what was in the potion without his help, but Elizabeth kept him in his bed, saying he wasn't well enough yet. Renard replied that Nick helped keep Diana from falling into the Royals' control and that only as a Grimm, he'd keep them from finding her. Elizabeth then decided that she would help Monroe and Rosalee.

Monroe and Rosalee brought Elizabeth to the storage unit, and Elizabeth immediately smelled the potion that Adalind had recently made, which Monroe could not. Rosalee showed her the cauldron Adalind had used to mix it, and Elizabeth stopped her from touching the remnants inside and broke off a piece herself. She then took a sniff of it before ingesting it, which caused her to morph into Adalind, then into Juliette, and back to herself. She said that there was "a lot of both of them" in the remnants of the potion and told Monroe and Rosalee to look for a book that won't open where the recipe would be.

Later, Rosalee was able to find the book, and Elizabeth opened it up by stabbing her hand with a knife and dripping her blood onto the side of the pages. The book opened up to the spell that Adalind had used, and Elizabeth said that she would only be able to reverse the spell in a location that had not been tainted by another Hexenbiest. Rosalee said she could use the spice shop.

Later that night at the spice shop, Elizabeth translated the spell Adalind had used from German to English. She wondered if Adalind had been aware of the risks she exposed herself and Nick to because it connected them in unpredictable ways. Rosalee asked her how they could reverse it, and she said that she would first have to make it. She began telling Monroe and Rosalee which ingredients to get.

At the spice shop, Elizabeth looked at the Zaubertrank Recipe Book and said that the only way that the spell Adalind used on Nick could have worked was if she had lost her powers at some point. Monroe told her that she did, and she said that would explain Nick's blood being involved. She then said that even with that having occurred, Adalind would have had to undergo the Contaminatio Ritualis while she was pregnant. Elizabeth then realized that she underwent the ritual with her grandchild, making the baby even more valuable than she had imagined. She said that she should have given Adalind more credit and that reversing the spell would take longer than she first anticipated. At that moment, a brick was thrown through then window of the spice shop, and Monroe noticed a wolfsangel on it. Elizabeth told them that it was a warning and that some Wesen were against mixed marriages.

Later, Elizabeth continued to work on making the potion, and she told Monroe that she needed more time.

Elizabeth later finished working on the potion for the time being and told Monroe that she needed to let it "ferment." She told Monroe and Rosalee to get some rest, and when they asked about her, she woged and told them she wouldn't be done for a while. She then began mixing the potion with her finger, still in her Hexenbiest form.

Monroe and Rosalee returned to the spice shop the next day, where Elizabeth, having changed into the appearance of Adalind, first "greeted" them. She had Monroe and Rosalee fooled at first, but Rosalee then realized that the potion worked. Monroe said that it was no wonder that Nick fell for it, and Rosalee asked Elizabeth if she had to sleep with Nick now. She said to Rosalee, "You can't possibly think... it's that easy," changing back into herself mid-sentence. She said that they were still missing the most important ingredient and that it wasn't up to them or her. Rosalee then asked her who it was up to.

Monroe, Rosalee, and Elizabeth showed up at Nick and Juliette's home, where Elizabeth told Nick that they had found what Adalind did to him. Monroe said that they figured out a way to get his Grimm back, and Rosalee added that it was a complicated spell. Nick asked how complicated it was, and Elizabeth told him that there was still a key ingredient missing and that he wouldn't like what it was. When Nick asked her what it was, she told him that it was Juliette.

Juliette asked what Elizabeth meant by the missing ingredient being her, and Rosalee told her Elizabeth had recreated the potion Adalind used on Nick. Monroe said that she needed to do what Adalind did for Nick to become a Grimm again, and Elizabeth said it needed to be "exactly" what she did. She then elaborated and said that Juliette would not be herself when making love to Nick, and Juliette realized that she would be Adalind as part of the spell.

Later at Nick and Juliette's, Nick resisted the idea of putting Juliette through the steps needed to be taken to reverse Adalind's spell, but Elizabeth talked about how doing nothing might be worse because the complex nature of Adalind's spell may have had unintended side-effects on Nick that could only worsen. Still unsure about the prospects of having Juliette look like Adalind though, Nick said that they would need more time to think about it.

Later, at Renard's new house, Renard told Elizabeth that his new home had better security than his old one. He asked her if she'd met the young woman staying with Nick and Juliette, and she said yes. Renard told her about how she'd decapitated a Hundjäger, and Elizabeth asked him if he thought Trubel knew she'd killed a Hundjäger. He said it would explain why she was staying with Nick and that she must be a Grimm. Elizabeth then asked Renard who had her granddaughter, and he finally told her that it was Kelly Burkhardt who had her and that she was a very dangerous Grimm. Elizabeth said she was going to find her, to which Renard replied that he knew she would try. Elizabeth then asked to look at him to make sure he was okay, and Renard woged, prompting her to smile and admire the success of what she had done.

Nick and Juliette, having decided to do reverse Adalind's spell and get Nick's powers back as a Grimm, watched as Monroe and Rosalee helped Elizabeth recreate the potion. She placed the witch's hat on the cauldron and warned Juliette to only take three breaths from it, otherwise she would permanently change into Adalind. Monroe asked her if Nick would be a Grimm again when they were done, and she said that if it worked, it would work on its own time. Nick asked about her saying "if," and she said that there were a lot of unknowns but that those unknowns were the same as him doing nothing. Juliette wanted to get it over with a took the three breaths from the hat; after a few moments, Elizabeth told her to look at her hand, and Juliette saw her hand changing as she then morphed into Adalind right after. Juliette said that she still felt like herself, and Elizabeth told everyone that it was time to leave as she took the hat with her.

Back at Renard's house, Elizabeth and Renard spoke about the witch's hat, with Elizabeth mentioning that she estimated the power and could feel it in its cloth. She thought it might be one of the original trente-sept, or thirty-seven, and Renard asked if it was from the malleus maleficarium. Elizabeth said that that meant the "Hammer of the Witches," which was a very difficult time for their ancestors. She asked him Adalind came to acquire the hat, and he said that it was from her mother after she died. Elizabeth asked him where her mother may have gotten it from, but he did not know. Elizabeth told him to treat it with proper respect and that it could come in handy. She then told him that she was leaving it with him because she was leaving but didn't know where to yet. She told Renard to be careful, reminding him that the way she saved his life could only be done once for both of them. ("Octopus Head") She then told Renard that she wanted her granddaughter and that he needed to be ready when Nick's mother contacted her son. Renard then held her hand and promised her that he would be. 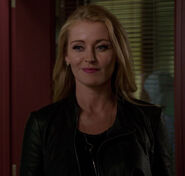 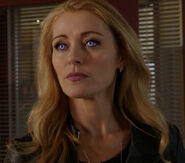