Start a Wiki
watch 02:26
'Grimm' Lore: Eliza Baske
Do you like this video?

Eliza Baske was a Blutbad who had Lycanthropia. She appeared in "Lycanthropia".

Mrs. Baske got off the phone with her son, Doyle Baske, who let her know that he had left work a little later than expected but was on his way over to her house. After hanging up left with the impression that she would see him soon, Doyle never made it to her house that night, as his car blew a tire and crashed into a tree. Meanwhile, two campers that night were killed just after sunset, a full moon lighting the night sky.

The next day, Doyle made it to her house after getting a ride from Nick and Hank, who introduced themselves to her. The sight of Doyle worried her greatly, as he had blood all over his shirt, but he assured her that he was okay. She told him that she was very worried, and he apologized and said that he had tried to call but didn't have cell phone service. Hank asked her if she had tried to call the police after Doyle didn't show up, and she told them that she thought he was late or just stuck at the office. Doyle then brought her inside the house before any further questions could be asked of her.

Nick and Hank returned to her house later that day, however, and she answered the door. The detectives told her they needed to speak to her son about the accident, and when Nick asked her if they could come in, she told them that she would get Doyle for them. The detectives then told Doyle he had to come down to the precinct to look at some photographs, but Doyle insisted he couldn't come because he had dinner plans. Nick and Hank kept insisting he had to come down to the precinct, however, prompting Eliza to ask the detectives what this wall all about again. Nick told her they were investigating a double homicide and that the individual responsible might have attacked Doyle as well, but she dismissed this and said, "But didn't you hear him? He can't go." Hank assured her that they'd have him back at the house by 7:00, but she looked towards Doyle and worriedly told him that 7:00 was too late. He told her it was okay and said he was just going to get his jacket, and as he walked away, Hank told Eliza to keep the door open. She then told the detectives that she was going to call her lawyer, before noticing Nick starting to walk away and look around. She asked Hank what he was doing, and Nick then spotted Doyle trying to leave the house out the back. Despite her protests, Nick and Hank went after him and brought him back moments later in handcuffs. She told the detectives to stop what they were doing and that he didn't do anything wrong, but Hank told her to stay out of it and not make things worse than they already were. She watched as they drove away, clearly concerned.

That night, she attempted to barricade herself in a room inside the house, taping her legs and wrists with duct tape as well, but when the sun set, she looked up towards the sky and began to enter a state of insanity, her eyes woging red. Moments later, she broke out of the tape and started pounding on the door to the room, with snarling audible from outside.

Hank, Nick, Monroe, Rosalee, Wu, and Doyle all returned to her house a little while later to find she had broken out of the room, and, as the sounds of howling indicated, she had turned into a Lycanthrope and was hunting again for the second consecutive night. Soon after the group went looking for her, she circled back to them and first encountered Wu, whom she tackled and scratched on the lower leg as Wu did all he could to try to avoid becoming her next victim. Doyle woged and got her off of him and tried to calm her down, but his efforts only worked for a few seconds, as she snarled and lunged at him just as it appeared he might be able to control her. As she lunged towards her son, this forced Wu to shoot her. She dropped to the ground, and Doyle, understandably horrified, knelt down by her side. She retracted back to her human form and tearfully said, "I'm sorry," to him, before she died. 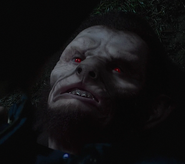 Add a photo to this gallery
Retrieved from "https://grimm.fandom.com/wiki/Eliza_Baske?oldid=185340"
Community content is available under CC-BY-SA unless otherwise noted.