An Eisbiber (ICE-bee-bur; Ger. Eis "ice" + Biber "beaver") is a beaver-like Wesen that was first seen in "Danse Macabre".

When woged, Eisbibers grow a coat of dull golden fur all over their bodies. Although it becomes part of their fur, their scalp and facial hair can still stand out. Their noses become black, and they grow whiskers. Eisbibers are not super-humanly strong and do not appear to have any physical enhancement when they woge.

Eisbiber have a reputation for cowardice (though they prefer to call it "common sense" ("The Killing Time")). However, they are not quite as cowardly as Mauzhertz, and if left with no other options, they will attempt to fight back when cornered, but if faced with an opponent they know they could not beat, they will run. Eisbiber show gratitude and/or guilt by giving gifts. They are usually friendly and non-violent but can be very nosy.

They are very communal and often make decisions that have an impact on their community democratically by voting at their Lodge. ("Leave It to Beavers") Although a peaceful, docile, and nonviolent race, their curiosity has been known to get them into trouble.

Eisbibers have a love for fixing and building things and are naturally quite good at it. As a result, they often find employment as construction workers, construction contractors, and repairmen of various types.

Their love for building and fixing things has resulted in Eisbiber having a longstanding antagonism with Hässlichen. ("Leave It to Beavers") Hässlichen have a natural interest in bridges, and due to their thuggish natures, extort the Eisbiber construction sites that work on bridges. The Hässlichen and Eisbibers have had an agreement where the Eisbibers pay extortion for generations. Any Eisbiber who breaks the terms of the agreement risks getting killed.

Due to their reputation, Eisbibers greatly fear Grimms and will go out of their way not to aggravate them. This behavior continues even if an Eisbiber has befriended a Grimm, as they'll panic if they think the Grimm is under great stress.

As a particularly furry species, Eisbibers apparently consider personal hair loss to be an embarrassing and touchy subject to talk about with others, or at least non-Eisbibers. John Oblinger went as far as to ask Bud to handle all the details, including passing along his anonymous thanks for a hair loss remedy from Rosalee's spice shop. ("Bad Hair Day")

Eisbibers have a common saying, "Strong together, safer apart." This phrase is a reminder that even though Eisbibers can fight best together, they are less likely to be sniffed out if they hide in separate places. ("The Killing Time")

The human heart is a significant organ for Wesen hallucination in large quantities, but when consumed in small doses, it can provide an Eisbiber with better memory and thought processing. 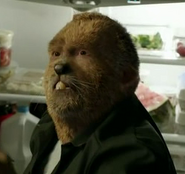 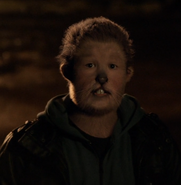 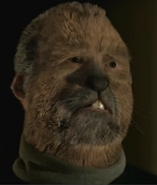 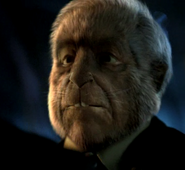 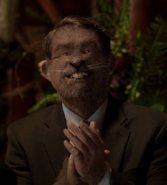 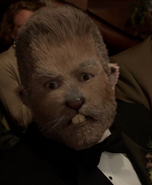 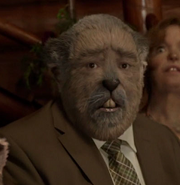 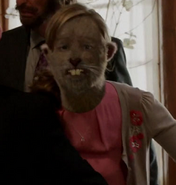 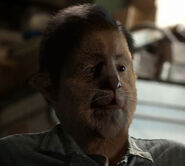 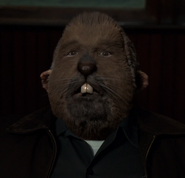 As depicted in the comic book series.
Add a photo to this gallery

Retrieved from "https://grimm.fandom.com/wiki/Eisbiber?oldid=198069"
Community content is available under CC-BY-SA unless otherwise noted.