Doyle Baske is a Blutbad who appeared in "Lycanthropia".

Doyle was on his way to his mother's house when one of the tires on his car blew, causing him to crash it into a tree by the road. Still conscious, he got out of the car and saw that the sun was setting. Very concerned about this, he started running down the road, but after a little while, the sun set, and two campers that could be heard nearby were killed.

The next morning, Doyle was nearly run over by a trucker because he was passed out in the middle of the road. The trucker got out of his vehicle and walked up to Doyle, which is when he woke up, much to the trucker's surprise. Doyle was treated at the scene by a paramedic, who advised him to go to the hospital to get checked out for head trauma and internal bleeding, but Doyle insisted he was fine and refused. Nick and Hank arrived at the scene and questioned Doyle about what happened. He told them that he had been attacked by a guy and his dog, but he didn't get a good look at them and had just crashed his car before that. Doyle then told the detectives what he did for work and showed them some identification. Hank asked him if he had been on his way to visit his mom, which he verified, and Doyle then agreed to answer a few more questions as the detectives offered to give him a ride back to where he had left his car. When they got to his car, Doyle told them that he had been attacked somewhere down the road, but Nick, somewhat dubious of Doyle's explanation of how he ended up in the middle of the road, pressed Doyle further for more information. Doyle then got testy and explained that it was dark at the time and that he was just trying to get away from his attackers, adding the fact that he had just crashed his car. Nick told him he might have a concussion, and Doyle acknowledged that but said his first priority was getting to his mother's house.

When they arrived at his mother's house, Doyle requested that the detectives not say anything about him having been attacked to his mother. They agreed to his request but told him that they'd need to test the blood that was on his shirt, and Doyle agreed to that as well. Doyle then got out of the car when he saw his mother and assured her that he was fine and that he looked worse off than he really was. He told her that he had tried to call her but that he had no cell phone service the prior night. Doyle then brought his mother inside her house and came back to give the detectives his shirt, before thanking them again for the ride.

Later, the detectives returned to Doyle's mother's house, and Mrs. Baske went and got Doyle so they could speak to him. Doyle asked them if they had found anything out about the man that had attacked him, and Nick told him that they had and that he was needed down at the precinct to look at some photographs they had. Doyle told them he couldn't go because he had dinner plans, and then he and the detectives went back and forth about where Doyle needed to go that night. Doyle's mother then asked what this was about, and Nick told her that they were investigating a double homicide and that the suspect may have also been who attacked Doyle. She told the detectives that Doyle said he couldn't go, and Hank assured her they'd have him back at the house by 7:00. She concernedly told Doyle that 7:00 would be too late, but he told her it was okay and said he was going to just grab his jacket. However, Doyle attempted to run out the back door of the house instead, when he was spotted by Nick and then tackled to the ground by Hank. As Doyle was being handcuffed, he told the detectives that they couldn't take him to the precinct because his mother would be all alone, but they took him back to the car and put him in the back seat, despite the protests of his mother.

Back at the precinct, Doyle was put in a holding cell, and when Doyle asked why they were putting him in there, they told him it was because he had ran and that he'd look at the photographs later. However, Doyle soon got bailed out and was about to leave when he was stopped by Nick and Hank again. They took him to an interrogation room, and Wu, Monroe, and Rosalee entered the room as well, having been at the precinct already in order to assist Nick and Hank. Rosalee told Wu, Monroe, Nick, and Hank that they weren't too late because Doyle hadn't woged yet, as they were expecting him to at sunset, and when Monroe pointed a crossbow at Doyle, Doyle then woged, showing the others that he was just a Blutbad and not a Lycanthrope as they had previously thought. Rosalee declared aloud that Doyle wasn't a Lycanthrope, and Doyle retracted, surprised that they knew about that type of thing. It then dawned on Nick that the Lycanthrope that they were looking for wasn't Doyle, but Doyle's mother. Doyle then explained that he had told them that he had been attacked by a dog to protect his mother and that he was too late to stop her from attacking the two campers that were killed by her. He said that when his mother came after her, he ran away and fell down an embankment and must have hit his head, ending up in the middle of the road. He told the group that if they knew about Lycanthropes, then they knew that his mother was unable to stop herself from killing when she was in that state and that he had to go back to her house to stop her from doing so again that night.

They arrived at the house shortly after, only to find that Doyle's mother had escaped the room in which she had attempted to barricade herself. As howls were heard outside, Doyle pleaded with Nick and the others not to shoot his mother, but Nick only replied with, "I'll try to tranquilize her, but if that doesn't work..." More howls were heard, and they went in the direction of where they were coming from as Monroe tracked her scent. Doyle then went off on his own momentarily to find his mother, however, eventually coming back to find Wu, who had split up from the group along with Hank. Doyle then told Wu to run, and Hank suddenly called out for Wu and started shooting. Hank alerted them that she was coming their way, and just as he'd warned them, Doyle's mom, woged in her Lycanthrope state, tackled Wu to the ground. After Wu did all he could to stay alive for a few seconds, Doyle came up, woged, and got his mother off of Wu. He and his mother were locked in a stare down, but Doyle then retracted and attempted to calm his mother down. However, she remained docile for only a few fleeting moments, before lunging at her son, forcing Nick, Hank, and Wu to shoot her. Horrified at what just happened, he rushed to his mother's side on the ground, where she retracted and told him, "I'm sorry," before dying. Doyle woged and let out long, mournful howls, before retracting and sobbing over his mother's death. 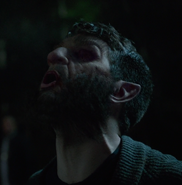 Retrieved from "https://grimm.fandom.com/wiki/Doyle_Baske?oldid=163988"
Community content is available under CC-BY-SA unless otherwise noted.