Special Agent Doug Rosten is an FBI agent who first appeared in "Thanks for the Memories".

After arriving at Nick and Juliette's home to investigate the decapitation of Weston Steward, he and his partner, Chavez, walked over to speak with Trubel. They had Trubel come with them into the house to walk them through what happened, beginning with Sean Renard being shot by Weston Steward and ending with her cutting off his head with a machete.

Later, Rosten came into the guest room and asked Chavez if she was okay with Steward's body being taken away. She told him yes and asked what he thought about Trubel, and Rosten found it noteworthy that she wasn't traumatized by what had happened. Chavez agreed and said she wasn't normal.

In an interrogation room at the precinct, Trubel answered more questions from Detective Meacham and Detective Pogue while Chavez and Rosten watched from outside the room. Rosten told Chavez that Trubel's answers were consistent with what she told them back at the house, and they informed Nick and Hank that no charges were going to be filed against Trubel.

Back at the FBI offices, Rosten informed Chavez that they'd found that the last call Weston Steward made was to GQR Industries in Rotterdam. Chavez asked if they knew what the connection was, and Rosten said they were working on it. He then told her that Weston's car was found a block from Nick's house with a packed suitcase that was just brought to the office. They then went through it and found money and passports for many countries, and Rosten commented that it looked like Steward was working for someone else other than the FBI.

He and Brady discussed an ongoing case they were working on with Chavez.

Later, Nick came to the FBI office to confront Chavez, and when he started to lose his temper, Rosten came to see what was going on. Nick was forcefully escorted out of the room, and Rosten told Chavez that he sounded crazy, and she said that he was.

He and Brady came to Nick's house to question him about the disappearance of Chavez. He showed Rosalee his badge when she answered the front door. When Nick arrived, they told him that Chavez had been missing since the night before and they questioned him about his argument with Chavez the day before. ("The Grimm Identity") Nick said that it was about her still investigating him in the Weston Steward case. Rosten said that they had stopped working the case, but Nick countered that although he might have stopped working it, Chavez had interrogated him at the precinct. ("Octopus Head") Nick asked Rosten if he knew about that, but Rosten didn't say anything. The detectives asked Nick where he was the night before, and he told them that he had been at the hospital helping with the delivery of his son, who they just met. Before leaving, Rosten warned Nick that if he had anything to do with Chavez having gone missing, it would only be a matter of time before they found out. 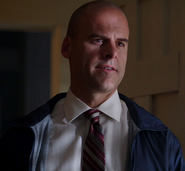