Dr. Diego Hoyos was a Coyotl doctor who was turned into a Wældreór after being bit by a mosquito and infected by a disease in the Dominican Republic. He appeared in "Chupacabra". Diego was a caring, compassionate, and devoted doctor, and his selflessness was best displayed when he gave up his chance at a cure to save his wife instead.

Diego was working with Gabe Reyes in the Dominican Republic helping treat patients when he was bit by a mosquito towards the end of his work trip. He returned home feeling tired, which his wife, Bélem, noticed right away. Diego was happy to be home and told his wife that she was making him feel better already. There was a noticeable rash that had developed around the area of his neck where he got bit, but his wife did not seem to notice this.

In the middle of the night, he woke up sweating and stepped outside his house to get some air. He suddenly started experiencing sharp pains that forced him to double over a few times. He made his way down the front steps in pain, eventually ending up on the ground on all fours. He then woged; nearby, a man walking his dog tried to calm his dog down, who ran off towards Diego. Diego killed the dog, and when the man came and found his dog's leash on the ground, Diego suddenly attacked and killed him too.

He woke up the next morning alongside a road with blood all over his mouth, the front of his shirt, and his hands. He noticed the blood and proceeded to wash it off with some water nearby. As he returned back to his house, he noticed the police presence around an active crime scene and zipped up his sweatshirt to hide the blood on the front of his white t-shirt as he walked by. When he arrived home, his wife ran outside and asked him where he was, and he said he couldn't sleep and that he just went for a walk to get some fresh air. She noticed he wasn't wearing shoes, and he said he didn't go far and quickly changed the subject to the crime scene, asking her if she knew what happened. She told him that someone had killed Justin, someone who lived in their neighborhood, and he asked if they knew who did it, but she said no. He looked back at the crime scene a bit concerned, and Bélem told him not to scare her like that again and asked him if he'd had any sleep. He said he had and that he was just jet lagged. She suggested he take a day off from work, and he said he would if he could.

At work, he took his own temperature, which was 103.5 degrees Fahrenheit. His co-worker, Gabe, entered and asked him if he was okay, and he said it was just a fever. Gabe advised Diego to go home and get some rest, but he passed it off as not being anything serious. He then asked Gabe if they spoke last night, and Gabe said no and asked why he wanted to know, and Diego said he couldn't remember what he did last night. Gabe again said he needed some rest and asked if he had spoken to Bélem, but Diego again said it was nothing. Gabe offered to run some tests, but Diego countered that he could run the tests himself and that he was just jet lagged still. Gabe stated that he still thought Diego should go home and then left the room.

Later, Diego continued to struggle with his illness at work. He dropped his pen as he struggled to write anything legible and clenched his hand on his notes, his blood visibly turning a greenish-blue tinge in his veins. He stumbled getting up out of his chair, accidentally knocked over a lamp, and managed to get to the parking garage in an elevator. He struggled to walk to his car and maintain his balance, eventually collapsing to his hands and knees, sweating, with his eyes nearly rolling to the back of his head. Gabe found him on his hands and knees in the parking garage and went over to see if he was okay, asking him if he fell. Diego then turned around, revealing his deformed woged appearance, and attacked Gabe, biting into his neck and sucking his blood. A car pulled out of a parking space and came across the attack taking place, and the driver frantically backed up her car into another parked vehicle as Diego gave chase and then ran away.

He managed to make his way back towards his neighborhood, still in his deformed state. A woman walking back to her home heard some snarling and hurriedly tried to unlock her front door to get inside. She barely made it inside as Diego tried to attack her and started hitting the front door. Two men came to the woman's rescue, one of whom hit Diego with a bat, forcing him to flee. Soon after, Diego was nearly hit by Wu's patrol car, and Wu then chased after him on foot. He found Diego, having returned back to his human form momentarily, on the ground behind a parked car. Seeing that he was human, Wu asked what he was doing there and if he had been attacked, but Diego said that he didn't know. Wu asked if he saw where "it" went, but he didn't say anything. Wu told him to stay there as he went to talk to Franco, and when Wu turned around a few moments later, Diego was gone.

He made his way back to his house, but when he got there, he saw his wife speaking to Nick and Hank inside. Possibly concerned about entering his house in his current condition with other people there, he went around the back and involuntarily vomited some blood. He later stumbled back into the house through a back door and collapsed in the kitchen, and Bélem heard him come in and found him on the floor. She asked him what was wrong, and he told her he needed help and that he didn't know what was happening to him as he started sobbing. He added that he might have "done something awful," and she went to go call an ambulance. He soon woged back into his deformed state and attacked her while she was about to make the call. The detectives, now with Wu as well, heard her screaming and came inside as he was about to attack again. Nick and Hank were able to subdue him and get him handcuffed, and he then retracted as he was pinned on a table. When Bélem told Wu that she saw the deformed creature too, he went to shoot Diego but was stopped in time by Nick, who told Wu that Diego was Wesen and very sick. Bélem rushed over to Diego, who was wheezing, and Nick told her that he was infected but that they might know someone who could help. He then called Monroe to tell him that he was with a Wældreór and to meet him at the spice shop.

Nick, Hank, Bélem, and Diego arrived at the spice shop, where Rosalee and Monroe were preparing the recipe to cure him. Rosalee said that if he had the disease for more than 48 hours, he could permanently become a Wældreór. As they gathered the ingredients to make the cure, Rosalee realized they'd only have enough to make one dose. Soon after, Bélem fainted and started convulsing, having become infected from Diego's attack. Diego looked on as his wife woged into a Wældreór and attacked Nick, with Nick being able to take her to the ground and handcuff her as Hank and Monroe held her down. Rosalee then ran over and said that the dose was ready, but she asked who she should give it to. Before anyone could answer, Diego, still handcuffed, grabbed the syringe from her. Nick told Hank to hold off from shooting him as he held the syringe above his head, and he then injected it into his wife's spine, curing her. He told his wife that he loved her as his face began to ripple with increasing frequency. He looked at Nick and said softly, "Kill me," but Nick said they could still help him. Diego winced as his face continuously rippled for several seconds, and he told Nick that it was too late. He slowly stood up and then involuntarily woged back into a Wældreór, snarled, and charged at Hank, who shot him twice. Bélem screamed and went over to him, and he told her one last time that he loved her in Spanish just before he died. 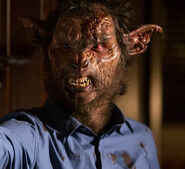 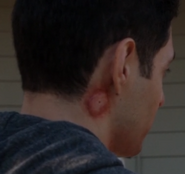 Add a photo to this gallery
Retrieved from "https://grimm.fandom.com/wiki/Diego_Hoyos?oldid=179553"
Community content is available under CC-BY-SA unless otherwise noted.