A Dickfellig (DIK-fay-likh; Ger. "thick-skinned") is a rhinoceros-like Wesen that was first seen in "Last Grimm Standing".

When Dickfellig woge, both sides of their faces gain hard, bumpy skin, and they grow one or two rhinoceros-like horns, with the primary horn sprouting out of their nose. Some Dickfellig also have a secondary, smaller one that emerges out of their forehead when they woge. The skin of some Dickfellig also turns gray. Dickfellig sometimes have glowing red eyes, which, like many Wesen, they are able to specifically focus their woge to.

They are also superhumanly strong and durable, as was evident when Brian Cooney briefly held his own against a Skalenzahne and, on a separate occasion, was willing to take on Nick upon first seeing him.

Unlike the rhinoceros, which relies on its nose for navigation, the Dickfellig's vision is about the same as any other human. Like humans, it is diurnal, so seeing at night requires some time for adjustment. ("The Chopping Block")

Unlike many Wesen, most Dickfellig don't fear Grimms; however, they are still wary of them, and if they have not seen a Grimm and have just learned about their fearsome reputation, as was the case with Big John, they will be very fearful of them. ("Lost Boys") Based on a description of one by Trubel, they attack by charging at an intended target.

...horn from his face! ...what I was seeing. Did I really see it?? But then he was charging me like a freakin' rhino! I ran down the alley but he followed me. I dove into a dumpster before he could see.

IT'S TIME TO STOP CRYING AND START FIGHTING BACK! 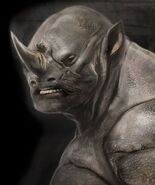 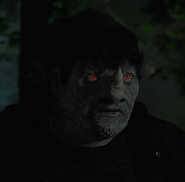 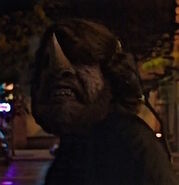 As depicted in the comic book series
Add a photo to this gallery
Retrieved from "https://grimm.fandom.com/wiki/Dickfellig?oldid=202697"
Community content is available under CC-BY-SA unless otherwise noted.