A death grip is done when someone has a fear of dying and getting stuck in the underworld. The belief is that if someone takes a pure soul with them when they die, they can trade their way into eternal afterlife. The actual grip of the dying or dead person performing the death grip is very strong and can not simply be pried open or released by traditional means. To release someone who has been grabbed, however, all that needs to be done to free them is to cut off the hand of the person performing the grip. Victims of a death grip go into a trance where they are being pulled towards a portal to the underworld. In this trance, their very life begins to drain from them as they are pulled towards the portal, and their eyes also turn completely black. After approximately 72 hours after death, the death grip will no longer be able to be done by a person who has died. ("Fugitive")

The death grip was first documented in the sixth dynasty by Egyptian Wesen under the reign of Merenre Nemtyemsaf II.

Excerpt from Rosalee's book, On the AfterlifeEdit

Once the Death Grip has been engaged, the damaged soul must then drag the innocent soul through the levels of hell via a vortex and present the soul to the ruler of the underworld. There are said to be seven levels of hell in some cultures. Other (sic) show just one. Surviving Wesen having been dragged through the vortex report seeing other trapped souls and an ever-nearing swirling tunnel of fire [Fig. 66-1].

The damaged soul has approximately 72 hours after death to attatch (sic) itself to a purer living soul. After the body begins to decompose, the soul will detatch (sic) from the corpse and make its descent to hell. 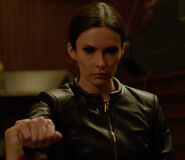 Add a photo to this gallery
Retrieved from "https://grimm.fandom.com/wiki/Death_Grip?oldid=187707"
Community content is available under CC-BY-SA unless otherwise noted.