Start a Wiki
watch 02:09
'Grimm' Profile: De Groot
Do you like this video?

De Groot was a member of the Wesen Council who first appeared in "Natural Born Wesen".

With the Wesen community starting to become increasingly more panicked about Wesen bank robbers breaking the Gesetzbuch Ehrenkodex, Rosalee Calvert found an old letter dated September 9, 1984, that was written to her brother, Freddy Calvert. The letter was from his contact on the Wesen Council, De Groot. Rosalee decided to call De Groot and inform him about the violation of the code and told him where it was happening when he asked.

Sean Renard soon after sent an e-mail of his own to De Groot with pictures attached of two of the bank robbers, Cole Pritchard and Krystal Fletcher.

Later, De Groot was looking at printed out pictures of the robbers that Renard had sent him, with one of the men working for him, Alexander, commenting that the situation had gone viral, and "the infection was spreading," referring to the other robberies by woged Wesen that had started to occur. De Groot replied that every generation needs to be reminded that the safety of the Wesen community is fragile. He ordered Alexander to deal with the situation immediately.

When the arrested robbers were being brought into the precinct, they were assassinated by a man Alexander had hired. De Groot looked at pictures of the dead bodies at the precinct and commented that it wasn't surprising they were Blutbaden. He asked Alexander who they used, and Alexander said it was a local hire, to which De Groot responded was "not surprising." De Groot assumed that word had gotten out about it, which Alexander confirmed and said that there had been no problems since. De Groot then shredded the pictures.

"Stories We Tell Our Young"Edit

De Groot told Alexander that he would be leaving soon due to reports about a possessed child, or Grausen. He told Alexander that a priest was dead and that the child was a nine-year-old boy who was in the hospital. He asked Alexander if he accepted responsibility for what needed to be done, and Alexander said he did.

Alexander returned with medical reports Nick gave him that had been run on the child, which proved the boy had been cured and that the cause of Grausen was actually a parasite. De Groot asked Alexander about the veracity of the reports, and Alexander pointed and that Nick didn't have to let him go. De Groot surmised that some of the things they'd heard about the Grimm were true, and Alexander responded, "I don't think he's like anything we've ever dealt with." He then told Alexander to monitor the boy and Nick as well.

De Groot was talking on the phone in Dutch, saying, "He'll wish he never brought it to a vote," as Alexander knocked and entered the room.

Alexander brought a photograph of the dead bodies of Mabel Kurlon and Laszlo Kurlon to De Groot and told him that it had just been sent by Jonathon Wilde, a Wesen bounty hunter, also known as a Maréchaussée. After Alexander informed De Groot that Wilde was requesting to hunt another Wesen, De Groot asked Alexander who he wanted the authority to kill, and Alexander showed him a bounty for a man named Casey Darwell. De Groot then looked at the picture of Darwell and said that nobody would miss him.

Alexander and De Groot also discussed Nick and if a determination had been made on him. After reading a note given to him by Alexander, De Groot said the Council had decided that Nick had interfered once too often, resulting in a bounty of $100,000 on Nick. Although De Groot and Alexander showed some disapproval of the Council's decision, De Groot said that no one cared about what they thought.

As he and other members of the Wesen Council got ready to conduct a meeting in The Hague, Alexander came up to De Groot and alerted him that Rosalee Calvert had an urgent call and wanted them to call her back. De Groot seemed annoyed at the timing of the request, but he told Alexander to see what her call was about.

Soon after, the meeting in The Hague was underway, and De Groot spoke to the seated Council members about the troubling attacks in various parts of the world. Another Council Member stood up and said that according to their agents in Italy, the political unrest was being caused by Schwarzkralle. De Groot said that the organization was assembling and coordinating their attacks far beyond what the Council had anticipated them capable of and that their attacks threatened all of them and could not be tolerated. He then said, "We need to take the vote on implementing our response. Make no mistake. We are at war! And we can have no mercy on those responsible." He then asked for a show of hands for those in favor of implementing their response, but one member at the end of the conference table stood up and opposed. He then woged and declared, "Occultatum Libera!" The Council member then picked up two concealed automatic firearms and started shooting everyone in the room, including De Groot, who was shot and killed. The only person who managed to escape was Alexander, who ran behind the shooter and made it out of the room. 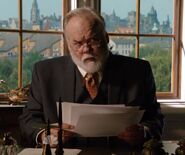 Retrieved from "https://grimm.fandom.com/wiki/De_Groot?oldid=196843"
Community content is available under CC-BY-SA unless otherwise noted.