DeEtta Calvert is a Fuchsbau and the sister of Rosalee Calvert. She first appeared in "The Good Soldier".

When Rosalee and Monroe came for dinner, she confronted Rosalee about missing their father's funeral and the fact that she was once a druggie, as well as their lack of communication for the previous 7 years. Rosalee teared up as she explained that she had not been able to attend her father's funeral because she had been in jail for shoplifting, and she only found out that he had died when she got out of jail. Rosalee said that by that time, DeEtta and her mother, Gloria, weren't speaking to her, but DeEtta said Rosalee could have apologized. Rosalee then left the dinner table as she said that they had no idea how much she regretted not being able to say goodbye to her father.

Later, however, DeEtta showed that she still loved her sister by threatening to kill Monroe if he ever broke Rosalee's heart.

At the Zimmer Mountain Lodge, Rosalee and Monroe were going through a rehearsal for their wedding. Nick stood by Monroe as his best man while Juliette and DeEtta stood by Rosalee as her maid of honor and matron of honor respectively. Bart, Alice, Gloria, Hank, and Bud all watched the rehearsal from their seats. At the end of the rehearsal, Judge Mason asked Nick if he was going to be wearing his sunglasses during the wedding as well, which caused everyone in the room to all speak at once trying to make various excuses why Nick absolutely had to wear his sunglasses. After the wedding rehearsal, everyone went to the rehearsal dinner.

Monroe, Rosalee, Bart, Alice, Gloria, and DeEtta all arrived at Monroe and Rosalee's home. Rosalee asked everyone if they wanted anything else before they went to bed, and everyone declined except for DeEtta, who mentioned she'd take more wine. Rosalee took her to the kitchen for wine while everyone else headed to bed.

In the middle of the night, there was a crash, causing everyone to leap out of bed. They all came down to the living room to find a very drunk DeEtta in Rosalee's wedding dress, which was covered in tears and red wine stains. DeEtta drunkenly insisted that her sister not get married in the dress, believing it to be "bad luck," as DeEtta had had two failed marriages after getting married in the dress. Afterwards, she passed out on the floor. The next morning, Monroe began opening blinds around the house, which woke DeEtta up. She realized she destroyed Rosalee's dress and apologized to Monroe, but Monroe told her not to worry about it because he and Rosalee actually hated the dress.

At the wedding, DeEtta was Rosalee's matron of honor, and she watched as Monroe and Rosalee got married. Soon after their first kiss as a married couple, Trubel came running in with the antidote for Nick and all the Wesen at the wedding start freaking out, so Nick, Hank, Juliette, Monroe, and Rosalee had to get Trubel away from the crowd. 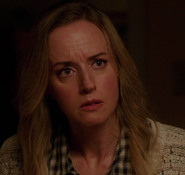