watch 02:08
'Grimm' Profile: Cracher Mortel
Do you like this video?
Play Sound

A Cracher-Mortel (CRA-shay mor-TEL; Fr. Cracher "to spit" + Mortel "deadly" or "mortal") is a puffer fish-like Wesen that first appeared in "The Waking Dead".

When woged, Cracher-Mortel gain large, round heads covered in short spikes on their scalps, jawlines, and chins. These spikes replace their hair, both scalp and facial. Their faces are tan in color with accents of a sickly-green on the sides and toward the backs of their heads. They have big eyes and a wide mouth, which is often curled into a malicious grin. When mustering up their spit, their heads inflate. The more spit they muster, the larger their heads get. The inflation of their heads causes the spikes to become more erect.

Cracher-Mortel have the ability to spit tetrodotoxin (TTX) from their mouth, which almost instantly seeps into their victim's skin and shuts down the neurosignals of nerves and heart cells and causes suspended animation. In this state, the victim's breathing and heartbeat are essentially undetectable without special equipment, he or she becomes paralyzed, and the victim is usually pronounced dead and buried alive. Atropine and scopolamine toxins reanimate the victim in a permanently zombified state. In this state, the victim is in a trance and will perform whatever task is asked of them by the Cracher-Mortel. Zombification has been a tradition of Vodun bokurs of Yoruba for several centuries. The state that a Cracher-Mortel victim enters after being touched by the green spit is similar to Lazarus syndrome. This entire process or condition is known as Dämmerzustand. There are four distinct stages that the victim goes through, and it's only in the fourth and last stage that they are curable. When in the final stage, they are consumed by rage and aggression and basically lash out at anyone and anything they see. In this stage, they possess a considerably higher pain resilience, as one was able to jump out of a second story window, land onto a car, and try to run away, while another shrugged off two punches from Nick, who had to smash him head first into a brick wall to knock him out. The process of becoming a zombie is excruciatingly painful, and one victim described it as feeling like their "skull was imploding."

The spit has a different effect on Grimms, as the rage stage comes earlier and the Grimm is left disoriented and confused. Once the rage stage begins, the Cracher-Mortel can no longer control the Grimm like they can with normal people. ("The Ungrateful Dead") Once a Grimm awakens in their zombified state, they are immune to a second dosage of Cracher-Mortel spit; it simply absorbs into their skin without a trace.

Cracher-Mortel also possess enhanced physical abilities, at least on par with a Grimm. They are also incredibly durable and don't tire easily. Baron Samedi, a middle-aged Cracher-Mortel, was able to match blows with Nick, a considerably younger Grimm, and was able to easily outrun him even though the chase occured on shipping containers; seemingly, Nick was only able to catch up with Samedi because the latter lured him into a trap. Samedi was capable of all this even in his human form.

Cracher-Mortel are confident and incredibly dangerous Wesen. They have no problems with infecting innocent people with their spit and using them as "zombie" slaves. They also have strong ties to Voodoo ceremonies, as they are responsible for inspiring multiple events. They are generally intelligent and cunning, as well as sophisticated and smartly dressed, often wearing a suit and a top hat. They are also very calm and have a sadistic sense of humor.

Cracher-Mortel also have a slight reputation for starting revolutions, using the zombie victims to create chaos.

I had followed the Vodou Priest to Bois Caïman, Alligator Woods near Cap-Français. Hired by the crown, I was to determine if the Priest was Wesen. The priest's name, Dutty Boukman, translated as the Book Man, given to him because he had taught slaves to read. As Boukman presided over the Vodou ceremony, one of the slave women started dancing, a knife in her hand. I found her movements exotic and alluring. Until she slit the throat of a black pig and gave the blood to those around her, who all swore to rise and to fight and to kill.

I quickly realized what I was witnessing was the beginning of a revolution. And I was not able to determine if Boukman was Wesen, but there was another participant who was.

He was referred to as the Baron, with several names attached to him. Samedi, Cimetière, La Croix, and Kriminel.* He is the head of the Guédé Family of Loa, one of the Vodou deities, who accepts those who have died into the realm of the dead. Later, I was to witness him wake a man who appeared to be lifeless, and who was about to be buried. When I finally found the courage to confront him, I found that I was dealing with a Cracher-Mortel, whose spit can induce a death like trance.

But I was forced to retreat, unable to dispatch the Baron, as the slave revolt spread quickly through the island. I was able to get aboard one of the last ships leaving the island and observed the fires of the burning plantations from the safety of the sea.

Dämmerzustand is caused by several different types of Wesen such as the Schmerzen-Kaninchen, who induces the state through his infected bite, and the Cracher-Mortel, who can induce paralysis, cataplexy, hypnagogic hallucination and the temporary illusion of death through an infected spit that is absorbed through the skin or inhaled. 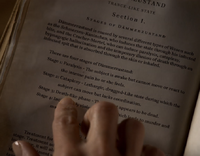 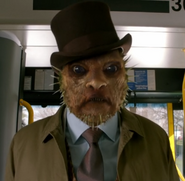 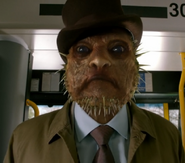 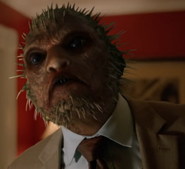 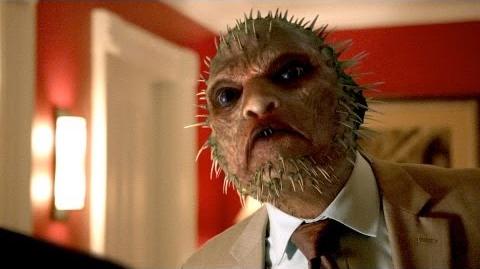 Retrieved from "https://grimm.fandom.com/wiki/Cracher-Mortel?oldid=202652"
Community content is available under CC-BY-SA unless otherwise noted.