Cousin 2 is a Coyotl who first appeared in "Bad Moon Rising".

He was part of Hayden Walker's pack that kidnapped Carly Kampfer, his cousin, to force her to participate in the Aseveración. He was arrested by Nick Burkhardt and Hank Griffin when they discovered the location of the Aseveración and rescued Carly.

"To Protect and Serve Man"Edit

When Nick and Hank went to visit Craig Ferren in prison, he was one of a number of Wesen prisoners who woged and watched Nick and Hank as they walked through the cell block. 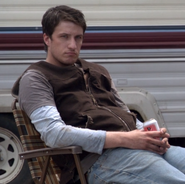 Cousin 2 is on the far right
Add a photo to this gallery
Retrieved from "https://grimm.fandom.com/wiki/Cousin_2?oldid=183370"
Community content is available under CC-BY-SA unless otherwise noted.