View source
watch 01:33
Wiki Targeted (Entertainment)
Do you like this video?
Play Sound

Coins of Zakynthos (ZAK-in-thohs) or Imperial Coins are historically significant golden coins tainted with dangerous levels of arsenic and mercury. ("Three Coins in a Fuchsbau")

During the 8th century B.C., gold was being mined from the island of Zakynthos in ancient Greece, and from this gold some coins were stamped with a swastika on one side, signifying good fortune, and on the other side the head of a Maahes, representing wealth and power.

When Alexander the Great acquired these coins in 334 B.C., he almost instantly embarked on a warpath to conquer Asia. He wore the coins through every battle until his death in Babylon in 323 B.C.

In the year 67 B.C., while serving as the Hispanic quaestor, Julius Caesar pawned the coins, which at that time adorned a statue of Alexander the Great. Suddenly, he realized he hadn't yet lived to his full potential and set out to reform the world.

In the year 44 B.C., Mark Antony stole the coins from Caesar during the execution of a brutal conspiracy. He gave the coins to his wife, Cleopatra. She held these coins until her assassination at the command of Augustus in 30 B.C. A series of murders followed, passing the coins along to Tiberius, Caligula, Claudius, and Nero.

At some point they were taken from Rome to east Asia, where the Dragon's Tongue became obsessed with them.

They made their way back to Egypt again, and the French general Napoleon Bonaparte commanded a scientific (and militaristic) raid of Egypt. Wanting to follow in the footsteps of Alexander the Great, he clutched the coins in his hands even through his defeat by Russians in 1812. Before his return from exile in 1815, Alberle Denswoz returned the coins to him. ("The Icy Touch") They eventually wound up in the hands of Adolf Hitler, and were seized by the Allies at the end of World War II.

Because of the high value and rarity of the coins many people die attempting to obtain them. At the same time, skin contact with these coins exposes the holder to dangerously high levels of arsenic and mercury. This impacts the central nervous system, and the resulting symptoms cause this person to feel a rush of power and control, as well as an urge to carry the coins as a good luck charm.

For the most part, the coins have the same effect on various (perhaps all) wesen types as well as humans. Grimms are resistant to the point of being immune to the coins, though it is not clear if this is resistance is psychological or chemical.

Historically, those who held the coins gained charismatic influence over other men. When the Greek empire fell, the coins fell into the Romans' hands. The coins had a devastating effect on whoever possessed them. The coins then made their way to China during the Han dynasty and were then lost for several centuries. The coins again resurfaced during the Third Reich (The rise of Adolf Hitler and the Nazis).

On 25 June 1945, according to Major General William Joseph Donovan of the United States Office of Strategic Services, in his report to the Office of Strategic Defense, three "Imperial Coins" (of a then-suspected ten) were removed from Hitler's Kehlsteinhaus and placed in a vault in Allied Headquarters in the United Kingdom, where they were kept safe for around 36 days, at which point the Allied Headquarters was shut down.

At some point, the Grimms gained control of the coins, something quite fortunate in light of their resistance to them. Kelly Burkhardt (Nick's mother) was the most recent known guardian of the coins until she was discovered and believed murdered for them in 1994.

After this, the coins eventually came into the possession of a German coin dealer, who was beaten to death by Akira Kimura after selling them to Sam Bertram. Bertram was murdered by Ian Flynn and Hans Roth. The coins were recovered during the homicide investigation, and after much handling from several individuals. Soledad Marquesa was shot dead while pursuing Sean Renard for the coins. Nick Burkhardt acquired them and hid them to protect the public once again.

Kimura followed a false lead on Farley Kolt before arriving in Portland to hunt for the coins. He searched the homes of Renard, Hank, and Nick. He killed Renard's maid, Patty, and nearly beat Renard to death. In Nick's home, Kelly Burkhardt stunned him by injecting him with something, and he was taken by the Portland Police to jail where he was later killed in his cell by eating a poisoned sandwich.

Nick returned the coins to his mother following the incident. She decided that rather than guard them, the time had come to destroy them.

The coins may only be destroyed on the island of Zakynthos where they were forged. Kelly Burkhardt indicated in 2012 that she would travel to Zakynthos to destroy the three coins she and Nick had been guarding. ("Bad Teeth") She later sent an e-mail to Juliette indicating that she had not made it to Zakynthos and had the coins "deposited for safekeeping" instead. Nick surmised that Kelly had hidden them somewhere that was hopefully safe. ("The Wild Hunt")

Sam Bertram opens the coin box to ingest and save them.

Swastika on the reverse of the coins.

Nemean Lion obverse of the coins. 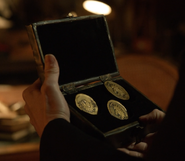