Start a Wiki
watch 02:10
'Grimm' Profile: Clay Pittman
Do you like this video?

Clay Pittman is a Heftigauroch and a former boxer who appeared in "The Last Fight".

In the locker room at Kingston Boxing, Clay's trainer, Abe Tucker, prepared him for a fight. Clay gave Abe an unconvincing look he asked him how he was feeling, and Abe reminded him to keep his on the prize and that he'd someday be the World Champion. Three men then entered the room, and Abe left. The men took some blunt weapons out of a bag, and Clay said, "Please don't," but they started beating him. Clay took the punishment initially and then woged and started beating up the three men. Sufficiently fired up, Abe re-entered at Stan Kingston's behest and told him it was time to go out to the ring. An invigorated Clay was introduced to the crowd, and he had to be restrained by Abe from attacking his opponent before the bell. Once the fight began, Clay woged his eyes. The two boxers traded a few jabs and dodged some punches in the opening seconds, but Clay pushed his opponent into the ropes and quickly knocked him out for the decisive victory.

The next day, Clay was training at the gym when Nick and Hank arrived to question Clay's promoter, Stan, about the murder of Bobby Moore, one of the men who had gotten Clay fired up in the locker room before his fight. Stan called Clay over to meet some "fans" and told the detectives, "This young bull is gonna be the next middleweight champion of the world." The detectives then informed Stan, Clay, and Abe that they were investigating a murder. Clay denied that he saw Bobby after he left the gym the night before. When Nick and Hank left, Clay remembered Bobby was one of the men in his dressing room and aggressively asked Stan, "I hit him too hard, didn't I? Didn't I?" Stan told him that he didn't do anything to Bobby that Bobby wasn't getting paid for. An angry Clay then went outside and woged as he repeatedly punched dents into a dumpster, not realizing Nick and Hank saw him.

Later at the gym, Trubel approached Clay and asked him to help with her hand wrappings. They introduced themselves, and as Trubel started talking to him about boxing, she quickly learned that Clay didn't like boxing and was only doing it for money for he and his mother. When Trubel told him there's other ways to make money, Stan came over and told Clay to get ready for his fight and told Trubel not to talk to Clay. Clay stuck around in the corner of the gym, however, and watched as Stan had Trubel fight another female boxer, Hurricane. Trubel impressed as she used street fighting tactics to win, and Clay then left once he noticed that Nick and Hank had returned to the gym. Stan told Abe to keep Clay in the dressing room while he dealt with things.

In the locker room, Clay demanded to know why the detectives were back, assuming that he was responsible for Bobby's death and that they must know what he did to him. Abe tried to reassure Clay that he didn't kill Bobby, but Clay said Abe didn't know and added that he couldn't box anymore. He begged Abe to tell Stan for him, but Stan walked in at that moment and lied that the cops were asking a lot of questions about Clay. Stan then said that as long as they were a team, they'd never find out about what he did. Clay looked at Abe, but Abe could only lower his eyes. Stan then told Clay to go get ready for the fight, and Clay left.

As Clay sat in the dressing room waiting for Stan, Abe, or more pre-fight attackers, Dolores, Clay's mother, entered and asked him where Stan was. He said didn't know and that Abe wasn't there either. He said that he couldn't go out to the ring and that he didn't want to fight, but Dolores told him that's what he does and that his fans and the reporters were out there waiting for him. Clay told her that she didn't understand and that fighting was "killing" him, but she came up to him and comfortingly reassured him that she loved him and just wanted the best for him. Clay said he knew that, and his mother continued that she got him the best manager and the best trainer, before her tone abruptly changed as she sternly told Clay that they did what she told them to do and that when they didn't listen, she did it herself. She then slapped Clay in the face and told him to go out there and do what he was born to do. He simply looked back at her in bewilderment, and his mother smashed a small chair and used one of the pieces to hit Clay repeatedly, yelling at him to fight and to get up when he fell to the ground.

Trubel then suddenly walked in and told Dolores to stop. Trubel told Clay he didn't have to fight anymore because Stan was dead, but Delores then woged and saw that Trubel was a Grimm. Clay then woged as well and grabbed a piece of the chair as he got up. His mother told him to kill Trubel before she killed them, but as she advanced towards Trubel, Nick and Hank entered the room as he almost simultaneously knocked his mother to the floor. He was about to begin hitting her with a piece of the chair, but Trubel and Nick urged him to stop. Clay then retracted, seemingly horrified at what he almost did, and began smashing his left arm with the piece of the chair until it was visibly broken, as his mother yelled out for him to stop. Holding his broken arm, Clay told his mother he was done and then walked out of the room and headed towards the ring as the ring announcer could be heard announcing he had lost via forfeit. 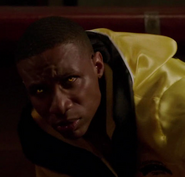 Retrieved from "https://grimm.fandom.com/wiki/Clay_Pittman?oldid=183363"
Community content is available under CC-BY-SA unless otherwise noted.