Chloe Bennett is a Willahara who appeared in "Bad Luck".

She agreed to cover for her brother, Peter, while he sneaked out to meet up with his girlfriend. While he was out, he was killed by a Leporem Venator named Nigel Edmund, who had also murdered their father. After her brother's death, her mom took her to a hotel before they caught a flight to Calgary. Chloe was kidnapped from her hotel room by Nigel Edmund in order to sever her foot. He was unable to get her to woge, however, before she was ultimately rescued by Nick and Hank. 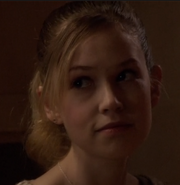 Retrieved from "https://grimm.fandom.com/wiki/Chloe_Bennett?oldid=169275"
Community content is available under CC-BY-SA unless otherwise noted.