Grimm Wiki
Register
Don't have an account?
Sign In
Advertisement
in: Hexenbiest, Characters, Season One Characters,
and 6 more

Edit
watch 02:24
Wiki Targeted (Entertainment)
Do you like this video?
Play Sound

Catherine Schade was a Hexenbiest that first appeared in "Love Sick". She was the mother of Adalind Schade and an old friend and lover of Sean Renard.

She was in on Renard's plan after she learned about it from her daughter. She initially seemed to be a very loving and nurturing mother. After Adalind returned home having failed her task, her mother was initially sympathetic. However, when she discovered that her daughter not only failed but also lost her powers becoming human, she became unsympathetic to her daughter and had no problem disowning her.

Renard instructed her to protect Juliette Silverton because Juliette tied Nick to Portland. Though she disowned Adalind, it was clear Catherine was upset about her fate: she hinted that Renard's treatment of Adalind encouraged her to make mistakes. Catherine apparently felt that Nick killed her daughter rather than just having made her human.

She collected the ingredients to bring Juliette out of her coma on Renard's orders. Renard came to pick up the white lumpy concoction in a jar. Soon afterward, Kelly Burkhardt went to interrogate her, and although she revealed the existence of "a prince," she refused to name him. The two entered a fight — Catherine with a piece of kitchen cutlery and Kelly with a magazine. Catherine was accidentally killed by Kelly when she was pushed headfirst into two large mirrors. 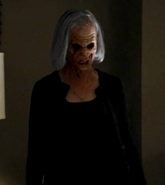 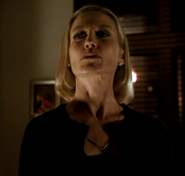 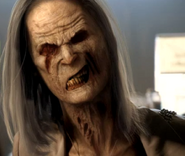 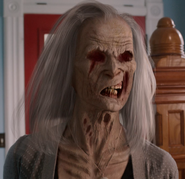 Catherine after her neck was sliced by glass

A younger Catherine Schade with her daughter