Brian Cooney was a Dickfellig who appeared in "Last Grimm Standing".

He was Dimitri Skontos' friend and training partner at Dimitri's uncle's gym. He and some others threw Dimitri a party to celebrate when he was paroled. In addition to being friends, Brian and Dimitri also shared the same parole officer, Leo Taymor.

When Nick Burkhardt and Hank Griffin were investigating the murders of Ed Weller and his wife, Lois, they interviewed him at the gym where he was working out. He offered to show the detectives where he and Dimitri used to run, and after indicating Dimitri's normal route, he then went another way. On this run he was captured by Leo Taymor and his men so that they could force him to participate in the Löwen Games.

He was killed by Dimitri Skontos while fighting him in a caged arena during the Löwen Games, with Leo Taymor ultimately deciding his fate when he turned his thumb down.

He had a distinctive rhinoceros head tattoo on his right arm, which Monroe noticed when the Löwen were feeding bits of Brian to the competitors. 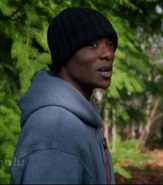 Add a photo to this gallery
Retrieved from "https://grimm.fandom.com/wiki/Brian_Cooney?oldid=172442"
Community content is available under CC-BY-SA unless otherwise noted.