Turner was born in Palo Alto, California. Her father is former pro-football player Kevin Turner of the New York Giants, Washington Redskins, Seattle Seahawks, and Cleveland Browns. In 1995, Bree graduated from Monte Vista High School in Danville, California, where she was voted 1994 Homecoming Queen. She subsequently enrolled at the King's College in London and at University of California, Los Angeles.

Turner, a competitive roller-skater and professional dancer, is a fan of video games. She said, “Growing up, I had a Nintendo. I liked the Mario Bros. and Track and Field. I was very good. I don't mean to age myself, but I came home every day, went straight to my Nintendo and rocked it. I have three younger brothers, so I always leaned towards more boy hobbies. I was a dancer, so in my down time I always wanted to play video games and hang out with the boys. Then when I went to college, I had a PlayStation but I haven't picked up my joystick in a while. I need to get back on it. I got into Dance Dance Revolution for a while.”

Turner landed her first speaking role in Deuce Bigalow: Male Gigolo. That same year, she was cast on MTV's late night anthology series, Undressed. She also did TV commercial for Gap "Khaki Country" and "Khaki-a-go-go," and for Dr. Pepper.

In 2000, Turner could be seen in two independent films, Scott Falconer and Scott Hatley's musical and romantic drama, True Vinyl, and writer-director Robert Boris' wrestling drama, Backyard Dogs. The next year, she shared the screen with Jennifer Lopez and Matthew McConaughey in the romantic comedy The Wedding Planner, with David Spade in the comedy Joe Dirt, and with Jason Biggs and Eugene Levy in the teen comedy American Pie 2.

Meanwhile, Turner was also playing recurring roles on the UPN sitcom Moesha, the ABC sitcom Spin City, and the CBS drama Cold Case. She also acted on stage, playing Ivy in The Pages of My Diary I'd Rather Not Read at Hudson Mainstage Theater in Los Angeles, California, in January 2003.

After being cast in Sorority Boys, she landed the starring role as the head cheerleader in Bring It On Again. Back on the small screen, she starred as Marjorie in the short-lived sitcom Good Girls Don't.

The next year in October, she guest starred on UPN drama Sex, Love & Secrets. That same month, she also starred in the pilot episode of the Showtime's horror/thriller series Masters of Horror, entitled "Incident On and Off a Mountain Road." On her appearance in the pilot episode of the series, she said, "I caught the first four and I loved them. It was nice to be rewarded with being the first episode to kick off the whole series. We actually went to the (Mick Garris; the series creator) executive producer's house and we had a little screening. The second the opening credits came on with the music and the stark white and the blood drops I was just so pleased. This is a class A project and I think it turned out that way."

In 2006, she guest starred on the CBS/VH1 drama Love Monkey, appearing in the TV series pilot-turned-TV movie, Flirt, and in a TV commercial for Budweiser. Back on the big screen, she was cast in The TV Set and in Nick Stillwell's Jekyll + Hyde, an adaptation of the Robert Louis Stevenson novel, The Strange Case of Dr. Jekyll and Mr. Hyde. She also had a supporting role in the romantic comedy Just My Luck.

She appeared in the comedy The Ugly Truth with Katherine Heigl and Gerard Butler, which was released on July 24, 2009.

In 2012, she landed a recurring guest role on the NBC drama series Grimm. In April, it was announced that Turner had joined the cast as a series regular. The same year she was in the pilot for the short-lived Wedding Band series. 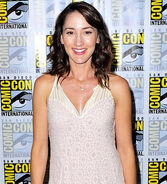 Add a photo to this gallery
Retrieved from "https://grimm.fandom.com/wiki/Bree_Turner?oldid=202577"
Community content is available under CC-BY-SA unless otherwise noted.