Special Agent Brady is an FBI agent who first appeared in "The Grimm Identity".

She and Rosten discussed an ongoing case they were working on with Chavez.

She and Rosten came to Nick's house to question him about the disappearance of Chavez. She asked Nick what the two argued about in Chavez's office the day before, ("The Grimm Identity") and Nick told the FBI agents that Chavez was still investigating him for killing Weston Steward. Brady then brought up that they went to Chavez' house and saw signs of a struggle in her bedroom, but Nick didn't say anything. They asked Nick where he was the night before, and he told them he was at the hospital helping with the delivery of his son. After Rosten warned Nick that it would only be a matter of time if he had anything to do with Chavez' disappearance, Brady "congratulated" Nick on becoming a father, and they left. 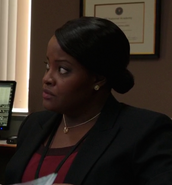 Add a photo to this gallery
Retrieved from "https://grimm.fandom.com/wiki/Brady?oldid=172823"
Community content is available under CC-BY-SA unless otherwise noted.