"Blood Magic" is the tenth episode of Season 6 of Grimm and the one hundred and twentieth episode overall. It first aired on March 10, 2017 on NBC.

A STRING OF BRUTAL DEATHS MAY BE TIED TO AN UNLIKELY PERPETRATOR - After a series of brutal and deadly attacks, Nick (David Giuntoli) and Hank (Russell Hornsby) find an unlikely lead in a local nursing home. Meanwhile, Eve (Bitsie Tulloch) goes to Adalind (Claire Coffee) to get answers that only a Hexenbiest can provide. Elsewhere, Capt. Renard (Sasha Roiz) confronts Nick about the mysterious symbols and tries to strike a deal. Silas Weir Mitchell, Reggie Lee and Bree Turner also star.

Monroe wonders if any reflective surface is a danger to Eve as Rosalee covers up a mirror. Monroe questions if letting Eve stay is such a good idea but Rosalee notes that she has nowhere else to go.

Eve visits Adalind for advice about the mirrors and asks how to go through them. Eve asks to read some of Adalind's mother's books to look for answers and says she thinks it's attracted to her because she can see the symbols. Adalind worries for Diana as she can see them too and Eve says they can't wait and they need to kill whatever is stalking them.

Allie and Maddie come out of a Cafe and Maddie offers to bring the car round to save Allie's feet. Outside her car she is attacked and thrown onto the bonnet with a large wound on her abdomen.

Adalind tells Nick about Eve's visit and what she her intentions with the mirrors were. Adalind says that Eve's looking for a little redemption and Nick says he needs to talk to her. Nick gets the call for a body.

Nick and Hank talk to Allie at the crime scene who says Maddie got along with everyone.

Margaret Cutler, a 91 year old with dementia tells Mason, a nurse at the home they are in that she used to run so fast when she was younger and wants to run again through the trees. As Mason helps her to her room she suddenly becomes confused, asking who he is. She says she remembers the sweet taste of blood in her mouth as Mason is unfazed. She notes that she always caught "them" as Mason fetches her an extra blanket. She woges into a furry wolf like creature and attacks him as his back is turned. She woges back when nurse Barton rushes in to help Margaret and orders him out as he screams in horror.

Nick and Hank find a similar case from 10 days ago. Wu shows them the surveillance footage and contemplate if the wesen is perhaps doing it for sport.

Eve is on the second book when Nick comes down to check on her and tells her she doesn't have to do alone. She says she doesn't want to do it alone and he leaves.

In Margaret's room, a buglike wesen opens the window as Margaret sleeps and inserts his nose appendages into her nose.

Nick and Hank show up to the nursing home where they are informed Margaret has died in her sleep after being attacked by Mason who is now being held in jail. Nurse Barton tells them that Mason killed her by scaring her to death although her wounds were superficial. After talking to Doctor Landeaux who examined her after the attack, they agree it was likely due to her age and condition she died of natural causes.

Renard calls Adalind asking to know about the symbols Diana has been drawing and wants to see the tunnel. She hangs up on him after telling him to take it up with Nick.

Hank and Nick show at Mason's house and he starts to run. They exchange disbelief they tackle and arrest him.

Eve reads a section in a sealed book about blood magic. She calls Adalind for more information who tells her its very dangerous but blood might be used as a form of currency to pass to the other side. She worries about how they would return after.

The M.E tells them the death was unlikely to be caused by Mason's attack but was surprised at the extremely high level of hyaluronidase in her system who tells them its commonly found in assassin bug saliva.

Rosalee gives Elizabeth Stanton melatonin in a bottle who tells her its hard to get out these days. Her expression wavers when Rosalee asks about her husband Norm. After she leaves, Rosalee notes getting old is no fun and Monroe says they will get old together.

Nick and Hank come in to inquire about the bug wesen and Monroe tells them it might be a Gevatter Tod - "A godfather of death" Monroe tells Nick he thinks he should let this one go after exchanging some weird looks with Rosalee. They take them into the back room where they tell them that dementia in the wesen community can be bad for everyone as they experiance uncontrolled woges. The Gevatter Tod is called to protect the community to end their life painlessly and peacefully. Monroe tells them that Rosalee and him have an agreement that if the other is suffering from dementia the other will call the Gevatter Tod. Nick asks to talk to them but Rosalee makes them promise not to arrest him. They call and a voice tells them to stay by their phone and he will call them back.

Wu calls them to the precint where he shows them footage of an old man who is present within one block of the crime scene. Renard calls Nick into his office to ask him about the symbols on the drawing, who then tells him to share what he knows and he will do the same.

Rosalee gets a call back from the Gevatter Tod who asks who it is who needs the help. She tells him it is her husband and give him their address. They call Nick who head over straight away. As the Gevatter Tod enters Nick identifies him as Doctor Landeaux. He angrily woges after hearing Nick is a grimm but they convince him they just want to talk and Nick asks him if he helped Mrs Cutler die which he confirms.

Doctor Landeaux gets another call from Mrs Stanton who's husband, a drang zorn is suffering from dementia and is threatening her. Nick, Hank, Rosalee and Monroe all go with him to their house and find Mrs Stanton alone and upset - her husband has left and doesn't know what he's doing but she's afraid he is doing bad things. Rosalee tells her she knew the melatonin wasn't for her and Mrs Stanton cries and tells her that she couldn't get him to stay asleep, she'd wake up and her husband would have gone.

Mr Stanton hobbles over to a girl waiting at the bus shelter who he delightedly exclaims "Elizabeth" She apologises and tells him he is mistaking her for someone else. Freaked out she runs away and he cries out to her as the police arrive. He gets increasingly confused as he asks for his wife, asking what they did with her. He woges and Monroe restrains him, putting them in their car as he woges back and begs them not to hurt him.

They take Mr Stanton home where he doesn't recognise his wife and he gets distressed when he sees everyone in his house. They sit him down as Wu comes in and shows Nick and Hank the footage of the old man with the cane. Nick goes over and picks up the exact cane and explains to Rosalee. Nick tells Doctor Landeaux to do what he has to do, and that he won't interfere.

Rosalee and Monroe stay as Elizabeth says her goodbyes to her husband. Doctor Landeaux gently closes Norm's eyes and woges, ready to perform the ritual.

Eve arrives at Rosalee and Monroe's house saying there's something they need to see but find the place empty. She tears away the covering that Rosalee put over a mirror. "I know you're in there" She says as she cuts her hand and smears blood over the surface. Nothing happens for a few seconds and she woges, smearing more blood on the mirror and woges back. Nothing happens and she turns her back and questions what she did wrong as the mirror liquidates behind her. She turns and the mirror surface is replaced by the stormy portal seen in the bathroom at Nick's. She puts her hands into the mirror and climbs through. 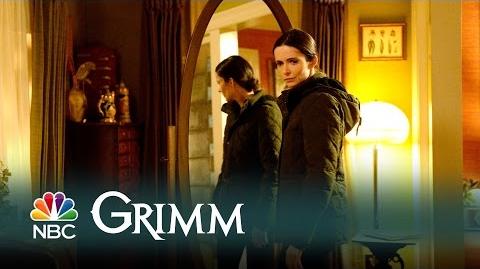 Retrieved from "https://grimm.fandom.com/wiki/Blood_Magic?oldid=196829"
Community content is available under CC-BY-SA unless otherwise noted.