Barry Kellogg is a Ziegevolk who appeared in "One Angry Fuchsbau".

Barry Kellogg was a lawyer and herder Ziegevolk who used his particular "Ziegevolk wiles" to nearly overturn what should have been an open-and-shut murder case. He employed his Ziegevolk pheromones to try and make the jury change their minds about his client, Don Nidaria, being guilty. He was able to use his pheromones to make all of the people called to the stand change their story of what really happened, spinning a story and using his pheromones to lead the witnesses on to believe that his version was accurate; for instance, he convinced Wu and the Nidaria's maid that Nidaria had been crying over the death of his mentally ill wife when his client had actually been an abusive man who threw her off a balcony during an argument. He kept a unique breed of toad, which enhanced his natural musk to his utmost advantage, storing them in jars until it was time to eat them. The gang was made aware of his actions when Rosalee was serving on the jury for the Nidaria murder trial, and his pheromones induced a sense of dizziness in Rosalee that prompted them to investigate the cause of it in greater depth, quickly determining Kellogg's true nature and actions.

When he successfully seduced a woman one night, he was confronted by Monroe fully woged. Monroe chased him until Barry came across Bud and got a ride from him to get away from Monroe. Bud gave Barry a handkerchief to remove some of his sweat. The next day, he was questioned by Nick and Hank about the attack that happened from the previous night. They were actually there to distract him as Monroe injected the Geruck Gland Neutralizing Potion into one of Barry's two toads, neutralizing the pheromone-producing gland. When he tried using his pheromones again on the jury during closing arguments, they didn't work, and his client was found guilty of murder.

He later went to the Exotic Spice & Tea Shop, seeking help for his abilities that were not working. He recognized Rosalee, Bud, Nick, Hank, and a woged Monroe. He attacked Rosalee, convinced she'd poisoned him, and Monroe threw him into a shelf of supplies. Nick then arrested him for assaulting Rosalee, telling him that no jury would believe his story.

While in jail, he called for a lawyer, and Don Nidaria, the occupant of the next cell, told him that lawyers were no use in there.

One of Kellogg's frogs 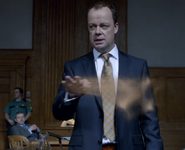 Kellogg releasing pheromones on the jury

Add a photo to this gallery
Retrieved from "https://grimm.fandom.com/wiki/Barry_Kellogg?oldid=173893"
Community content is available under CC-BY-SA unless otherwise noted.