"Bad Teeth" is the first episode of Season 2, the twenty-third episode overall, and the Season 2 premiere of Grimm. It first aired on August 13, 2012 on NBC.

A FOREIGN AGENDA TO HUNT DOWN NICK IS REVEALED AS THE BODY COUNT IN PORTLAND RISES --BRIAN TEE, JAMES FRAIN AND MARY ELIZABETH MASTRANTONIO GUEST STAR -- After their face-off with Kimura (guest star Brian Tee), Nick (David Giuntoli) finds himself trying to come to grips with the return of his mother, Kelly Burkhardt (guest star Mary Elizabeth Mastrantonio). A trail of brutal murders unveils a foreign conspiracy to hunt down Nick, leading to several revelations about his past. Meanwhile, Juliette (Bitsie Tulloch) still lies in her mysteriously-induced coma as Rosalee (Bree Turner) and Monroe (Silas Weir Mitchell) work tirelessly to bring her out of it safely. Elsewhere, Hank (Russell Hornsby) struggles with the shocking truths he's recently seen and Captain Renard (Sasha Roiz) deals with unexpected family issues when his estranged brother (guest star James Frain) comes back into his life. Reggie Lee also stars.

A freighter transits the North Atlantic Ocean; two weeks later it passes under the bridge at Astoria, Oregon on a route that grants access to the harbor in Portland, Oregon. After the ship docks, a security guard is checking the holds and notices blood running out of a shipping container. He calls for backup and when he and other officers enter the container they find mutilated bodies. Hearing a growl, they look above themselves to see a fanged creature. The cat like creature makes a flinching movement as if trying to terrify them and jumps off the container it was previously squatting on and attacks the officers.

Kelly Burkhardt arrives outside Nick and Juliette's Home and finds that Nick Burkhardt is fighting with Akira Kimura. She intervenes in the fight, injecting Kimura with an unidentified substance that temporarily disables him. Nick thinks she is the boss or in the group of Akira and does hand to hand combat. Eventually when Nick pushes her away, he holds her at gunpoint until she calls him by name and he recognizes her as his mother. They examine Akira's back, which is tattooed with images resembling the Coins of Zakynthos. Nick hears a noise and Kelly disappears.

Captain Sean Renard, Sergeant Wu, Officer Franco and other police officers arrive and take Kimura into custody. Renard observes the crossbow bolt in the wall of Nick's home. Nick tells Renard about Juliette Silverton being comatose in the hospital with an undiagnosed ailment. He tells Nick that he will help if he can. All the police officers depart with Kimura. Nick walks back into his kitchen and finds his mother standing there. She says that she wants to talk to Kimura. Nick tells her that that will be difficult. Their conversation is extremely tense. Nick wants to know where she has been for eighteen years. Kelly explains the events of the night she supposedly died and, when asked, admits that Marie Kessler always knew she was still alive. She says that it was not her in the vehicle in Rhinebeck, NY, it was a friend. When Kimura and the others killed Reed and the friend, they thought the friend was Kelly, and took her head as a "trophy." When the police showed up, the bodies were so badly burned that they identified the other body as Kelly's. Since the head was taken, there was no dental records, resulting in the misidentified body.

While Nick and his mom are talking, Monroe and Rosalee arrive at Nick's house. Nick tells them that Kimura is responsible for the destruction inside of his house. Monroe and Rosalee woge when they realize that someone else is in the house by catching the scent of Kelly. Kelly thinking that since Monroe is a Blutbad, was a threat, attacks Monroe and pulls out a knife, but Nick pulls his mom off of Monroe and he tells her that Monroe and Rosalee are his friends and he tells Monroe and Rosalee that Kelly is his mother. Kelly is upset with the fact that he is friends with a Blutbad and a Fuchsbau. Rosalee tells Nick that Juliette is in trouble and they don't have a lot of time to help her. She says that the spell that put Juliette into a coma is called L'espirit Ailleus. The spell causes memory loss and has similar symptoms to dementia. Rosalee says that she and Monroe are working on the cure, but that it will take 16 hours for it to be ready.

Nick learns that the freighter is owned by GQR. When he is called to investigate the scene at the harbor later, he notices evidence of a Wesen being involved, and in particular, an image of a scythe painted on a wall in blood.

At the trailer, Kelly and Nick search through books to find a Wesen that might have attacked the group on the boat. She spots a Wesen known as Mauvais Dentes that were well known for being able to wipe out an entire village single handed. She closes the book and insists that she needs to see the body in order to confirm it was that exact Wesen. Once they get there and see the body, they noticed deep, wide claw marks across and the chest and face with punctured holes in the side of the neck that was exactly over a few inches wide confirming it is a Mauvais Dentes.

Meanwhile, at jail, Renard pays a visit to Kimura, who is unhelpful when Renard interrogates him. However, as Renard is leaving, Kimura comments on how there are now two Grimms in Portland.

Later, when two FBI agents get involved in finding the criminal responsible for the murders at the harbor, Monroe and Rosalee get to work on designing a cure for Juliette. However, with the knowledge of the killer being a Mauvais Dentes, Nick and Kelly soon depart to question Kimura. Unfortunately, by the time the two Grimms arrive at the jail, Kimura has already been killed through a poisoned sandwich.

As these events unfold, Hank finds himself getting increasingly worried about his mental state as he continues to think about the mysterious things he's seen recently that he can't explain.

Back in Portland, Nick later receives a phone call while at the jail. It's from the FBI agent. Panicking, she begs Nick to come and save her from the killer, which has already killed her partner and will kill her if Nick doesn't show up at the old lumber mill or warehouse. As she says this, Marnassier appears, and he takes away the agent's phone as she breaks down in tears.

Nick and Kelly quickly race over to the warehouse that the agent told Nick to come to. They immediately split up upon arrival with Kelly waiting outside to provide backup while Nick goes inside. While searching inside the warehouse, Nick comes across the second agent, who has been viciously killed, her throat lacerated and face torn.

As Nick continues past the corpse and further into the warehouse, Nick gets another call. This one is from Monroe and Rosalee, who reveal that they have good news and bad news. The good news is that they've finished developing a cure for Juliette. The bad news is, the cure is unstable and must be applied to Juliette within a certain time limit. If not applied in time, the cure won't work. After saying this, Monroe and Rosalee tell Nick that he needs to hurry and join up with them at the hospital where Juliette is and that they are already on there way. Nick responds to this by telling them that he is unable to set off to the hospital just yet, but reassures them that he will be on his way as soon as possible before hanging up.

Unfortunately, seconds later, Nick soon discovers that Julliete's condition is the least of his problems when another body nearby the dead agent rises up and reveals himself as Marnassier while Nick's back is turned. Upon sight of Nick, Marnassier shifts into Mauvais Dentes form. The episode then ends with Nick, alerted by noise behind him, turning around just in time to see the Mauvais Dentes charging towards him, roaring furiously. 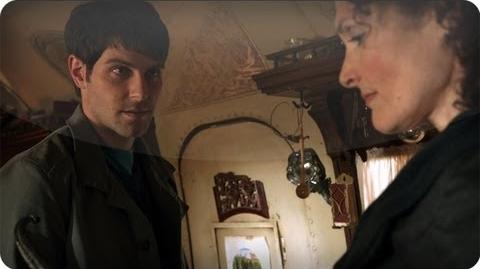 "There once was a man who lived a life so strange, it had to be true. Only he could see what no one else can... the darkness inside, the real monster within. And he's the one who must stop them. This is his calling. This is his duty. This is the life of a Grimm."

The other writing reads, "La mer est agitée d'affamée," which would be broken French for "the sea is choppy/stormy (?) famished."