"Bad Hair Day" is the first Grimm webisode to be presented. Part 1, "A Sore Subject," was first made available on January 16, 2013.

Monroe is trying to play some notes on a zither at the spice shop, when Rosalee adjusts it and competently plays a few notes to his pleasant surprise. Bud Wurstner shows up to meet them, whom Nick Burkhardt recommended he see regarding a hair loss problem. Bud asks if Rosalee has a remedy for hair loss for his "friend." As he is balding himself, the couple believe that it is actually for him and wants to avoid embarrassment. Monroe wonders why the friend doesn't come down himself; Bud explains that the hair loss is a sore subject and woges to make a point of how Eisbibers are a very furry species. Satisfied with their answer, he excitedly leaves. Monroe asks how he can help Rosalee, at which she gives him a sweet, somewhat patronizing look that he protests.

Rosalee has given in, and Monroe is assisting her in making the hair regrowth formula. Upon learning that the ingredient he's working with is the primary base agent, Monroe decides to double the dose when Rosalee leaves the room. Despite being told that just one dose is plenty, he figures that he's "never heard a man complain about too much hair."

Bud drops off a huckleberry pie baked by his friend's wife to pass on thanks to Monroe and Rosalee for preparing the formula "for his friend." He noticeably has a full head of hair, and when asked by Monroe, admits he used a little bit as his friend is nervous with trying new things. Rosalee also tries Monroe's "creative" baking, which involved making, among other unusual combinations, a dandelion-seaweed scone. After having sampled at least one before Bud came in, she deflects to trying the pie instead, rather then the spirulina-raspberry or goji bean-rice leaf scones.

Late in the evening, Rosalee is working on something for a Scharfblicke, to which Monroe reminisces of one he knew in grade school. Bud comes by unexpectedly, panicking because his hair (and especially his friend's hair) is growing out of control. Rosalee apologizes and shoots Monroe a look; even without his rather guilty expression, she knows he did something outside of her instructions with the formula. Monroe tells Bud that they know that the cure was just for him, and they just need to focus on helping him. Exasperated, Bud runs outside and brings in John Oblinger, who's extreme hair growth is indeed much worse. After Rosalee finds a solution, she and Monroe then have to wash the cure into both Bud's and John's hair. Rosalee makes Monroe apologize as they work, adding that if there's any way to make it up to them, to just ask. "Well," John ponders, "I have this friend..."

Bud woges, revealing why hair loss would be a problem 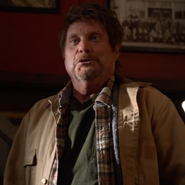 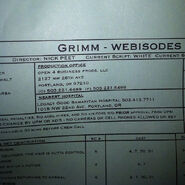 Retrieved from "https://grimm.fandom.com/wiki/Bad_Hair_Day?oldid=196998"
Community content is available under CC-BY-SA unless otherwise noted.