Grimm Wiki
Register
Don't have an account?
Sign In
Advertisement
in: Dämonfeuer, Characters, Season One Characters, Volume 1: The Coins of Zakynthos Characters

Ariel Eberhart is a Dämonfeuer whose father, Fred Eberhart, had been seriously injured in a fire which killed her mother. Fred was depressed about the loss of his wife, and Ariel saw Nick Burkhardt as a tool to restore her father's dignity. In her plan, her father would die trying to defend a woman whom he believed to be his wife.

Nick Burkhardt first contacted Ariel because she was the only family member left of Fred Eberhart. He later visited the fire dancing club where she worked; there, she recognized Nick as a Grimm. Later, they met in Ariel's backstage dressing room. She flirtatiously changed in front of Nick and told him that she didn't like most Grimms, but she liked him. She told Nick that her father was no longer in contact with her ever since her mother died.

Nick followed her home, where she attacked him. She pounced onto Nick, ripping his shirt off and dislodging his phone. When Juliette called, Ariel answered the phone, making it seem like Nick was cheating on Juliette. Nick angrily snatched his phone back. Later, she sprayed her lipids on a window of Nick's home and drew a broken heart.

The next night, she went to Nick's house again and took Juliette hostage. She went into Nick's bed pretending to be Juliette, only leaving when Nick saw her dragon tattoo. She sprayed her lipids and then ran out of the house. She then called Nick using Juliette's phone. She told Nick it was time for search and rescue; if Nick ever wanted to see Juliette again, then there could be no police involvement. She proceeded to take a bound up Juliette into her father's lair in the railroad tunnel.

In the lair, she was punched by Juliette, who had been freed by Monroe.

After her father died, Ariel began to rotate her body while exhaling noxious fumes and reciting a verse. As Nick left Fred's lair, there was an explosion, and Nick and Juliette believed her to be dead. She later walked out of the lair, unharmed. 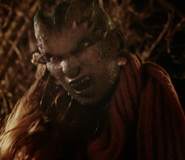