Arbok was a Königschlange who appeared in "Over My Dead Body".

"Over My Dead Body"

Arbok was hired by an unknown person to oversee the murder of Monroe. He, in turn, hired a Skalengeck named Buxton Jacobs, who attempted to molest Angelina Lasser outside a bar. Angelina killed the Skalegeck. Arbok was angry that she killed his hitman and forced Angelina to take the job of killing Monroe. When Angelina delivered the supposedly dead body of Monroe, Arbok woged and checked for any vital signs. Fooled by Dead Faint Potion into thinking Monroe was really dead, he then contacted his employer, who was revealed to be Sean Renard's friend, Mia Gaudot. After Mia arrived, she ordered Arbok to pay Angelina. When Angelina revived Monroe, however, Arbok fled into the trees and attempted to kill Nick Burkhardt; however, Hank Griffin killed Arbok first. 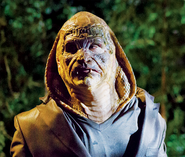 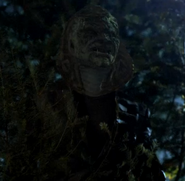 Retrieved from "https://grimm.fandom.com/wiki/Arbok?oldid=200454"
Community content is available under CC-BY-SA unless otherwise noted.