Anton Cole is a Luisant-Pêcheur who appeared in "Kiss of the Muse".

While escaping from Nick after killing Khloe Sedgwick's latest boyfriend, Evan Childs, Anton leapt into a cana, woged into his Luisant-Pêcheur form, and swam down river to escape.

He lived in a loft, which was filled with paintings of Khloe done in various styles. There was also a painting showing the death of Childs in the exact manner Anton killed him.

That evening, he broke into a paint shop and used the paint to create a mural of Khloe's face on a vacant lot in the downtown area of Portland.

He was at Khloe's home when Nick visited, and Khloe encouraged the two to fight. She wanted Nick to kill Anton to prove his love. Nick easily overpowered Anton, and he was arrested for the murder of Childs by Officer Gates, while Captain Renard restrained Nick.

When in holding, Nick pointed his gun at him getting ready to kill him, but the arrival of Juliette prevented any more harm from occurring. When Nick dropped his gun, Captain Renard prevented Anton from picking it up. 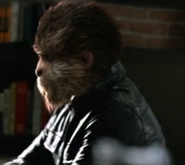 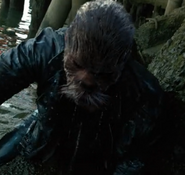 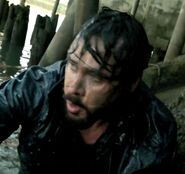 Nick's drawing of Anton Cole
Add a photo to this gallery
Retrieved from "https://grimm.fandom.com/wiki/Anton_Cole?oldid=151686"
Community content is available under CC-BY-SA unless otherwise noted.