Grimm Wiki
Register
Don't have an account?
Sign In
Advertisement
in: Blutbad, Characters, Season One Characters,
and 4 more

Edit
watch 02:24
'Grimm' Profile: Angelina Lasser
Do you like this video?
Play Sound

Angelina Lasser was a Blutbad who appeared in "The Three Bad Wolves" and "Over My Dead Body". Angelina presented herself as a passionate and violent Femme Fatale, dressing in leather, riding a Harley-Davidson motorcycle, and engaging in lots of drinking, fighting, and casual sex.

She first appeared in "The Three Bad Wolves" at her brother Hap's house, after he was nearly killed in an explosion. She then went to Monroe's home, ostensibly to help protect her brother. There, her personality got in the way of her goals: she got into an altercation with Nick and then lured Monroe into the woods for a romantic night of love making and rabbit-killing. While Angelina and Monroe were in the woods, Hap was left alone in the house. Posing as a 24/7 Ribs delivery man, Orson had little trouble executing Hap in their absence once Hap went to open the door.

After Hap's death, Angelina zeroed in on Orson as the killer and went to the Bauerschwein's home to take revenge. Nick stopped her from killing the lieutenant by striking her in the sensitive part of her lower back, where the Blutbaden have a special nerve cluster. Orson managed to shoot her in the back, but she escaped, leaving a trail of blood. Angelina then left a copy of a photograph of her family on Monroe's front porch and disappeared, howling.

Angelina was in the End Up bar, where she was dancing with a man who was buying her drinks and snacks. When he came on too strong, she took her motorcycle helmet and left. In the bar parking lot, the man approached her from behind, attacked her, and threatened to rape her. She hit him with her motorcycle helmet. He then woged into a Skalengeck, and she woged and killed him. While she was going through his wallet, another man put a gun to her head.

She was forced into a van where Arbok was waiting. He said that the Skalengeck she killed had been hired by him to kill someone. He woged into a Königschlange and used his tongue to examine her, at which she commented, "Neat party trick." He determined from her heartbeat that she was afraid. He offered her money to take the contract. Angelina took the file on the target and quickly agreed. She was given a phone and told that she had twenty four hours to obtain the body. She was then supposed to call them for delivery instructions. She exited the van, clearly shaken.

Angelina barged into Monroe's home and interrupted Monroe and Rosalee kissing. She went to the kitchen and helped herself to some wine. Monroe followed her, where she laughed at him for having a relationship with a Fuchsbau and then told him that she had been hired to kill him. She showed him the file she received from Arbok and tried to convince Monroe to leave town. Monroe convinced her that he had to call Nick, and they waited for his arrival.

When Nick arrived, he immediately tried to arrest her for the murder of the two Orson brothers, ("The Three Bad Wolves") but Monroe convinced him not to, as she had risked her life to warn him about the contract on his life. Nick was further angered when she told him about the Skalengeck outside the bar that she killed, but their truce held.

Angelina and Nick then left Monroe with Hank and headed to the End Up bar. Once there, Angelina, posing as another detective, "solved" the crime by putting together the "clues" she left when she killed the Skalengeck to show that the victim, a serial rapist, had tried to rape a woman who had killed him with a crowbar. The on-scene officer believed that Angelina was Nick's partner and that he was lucky to have such a partner, much to her amusement and his chagrin.

Angelina then realized that the phone she took from the Skalengeck could lead them to the people who wanted Monroe dead. Angelina cornered Will in a shop, and he revealed that Monroe was being hunted because he was working with a Grimm.

Angelina and Nick then went to Hank's house to collect Monroe and formulate a plan. Nick convinced Hank that to save Monroe they had to work with Angelina. The plan was to drug Monroe with a potion that caused the appearance of death to confound the Königschlange's senses, and then Angelina would deliver Monroe's body. Rosalee warned that if Monroe's fingers started to curl and his skin turned pale, he should be resuscitated immediately.

Angelina took Monroe's body to the meeting place where Arbok woged and confirmed that Monroe was dead. They forced Angelina to wait until Mia arrived, and she commented that Angelina was very cold-blooded to kill one of her own kind. Angelina became anxious as Monroe's fingers began to curl. There was a further delay whilst Mia and the men returned to their car, during which time Monroe's fingers curled more, and he started to turn pale. She abandoned all pretense and started to resuscitate him. When the men returned, they were disgusted until Monroe revived with a gasp.

Angelina prepared for the upcoming fight and jumped off the back of the car where Monroe was, but she was shot by Will. Monroe was enraged and tore out his throat and then returned to Angelina's side. She warned him to be careful in the future when she would not be around and then died. Nick and Hank killed the rest of the men, but Mia escaped.

Nick started to call the police, but Monroe stopped him, saying that he wanted to mourn Angelina the Blutbad way.

Deep in the forest, Monroe buried Angelina at the base of a tree, covered the grave with rocks, and then smashed his watch and placed it on the center of the grave. He then woged, and after a few false start whimpers, let out a mournful howl that resounded throughout the forest.

Keeping in Tradition with Blutbad Culture[]

Angelina's actions in "The Three Bad Wolves" revealed several things about Blutbaden culture. Her massacre of Orson's brothers was an extreme manifestation of traditional Blutbaden-Bauerschwein relations, in which Blutbaden terrorize and bully the generally peaceful Bauerschwein, or as Angelina put it, "tear out a little piggy throat" for fun. Her response to her brothers' deaths also reflected the Blutbaden ethos of personally avenging any crimes committed against a Blutbad or their family. In addition, Monroe never for a moment doubted that Angelina was innocent of her brothers' deaths. Nick credited this to Monroe's feelings for Angelina, but Monroe said that it was purely cultural. He told Nick, "We don't kill our own." Mia also commented that it would be very cold-blooded for a Blutbad to kill one of their own kind.

Maintaining the "big bad" persona, Angelina struggled to express her own less violent emotions, and she was visibly uncomfortable with problems she couldn't attack, as seen when she could not bring herself to say how much she cared for Monroe, even though he was taking a draft which could prove fatal. ("Over My Dead Body") 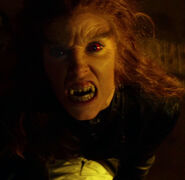