Alicia is a Fuchsbau who first appeared in "Red Menace". She was a friend of Juliette Silverton as well.

After her abusive husband, Joe, hit her again, she called her friend, Juliette Silverton. Juliette told her to leave him and that she could stay with her and Nick.

When she was telling Nick and Juliette her story, she inadvertently woged in front of Nick, but as she was not looking at him, she did not realize that he was a Grimm.

Juliette took Alicia to work with her for a day, and she helped Juliette with cats, dogs, and a parrot.

Later, Joe called Nick and Juliette's house looking for her. Nick and Juliette both denied that Alicia was at their house, but he didn't believe them and hung up while sitting in his car outside the house.

Joe saw her sitting in a cafe with Juliette and Nick. Alicia went to the bathroom, and Nick told Juliette that Alicia was Wesen. At first, Juliette didn't really believe it, but she trusted Nick and was grateful when he confirmed that Alicia was a Fuchsbau like Rosalee Calvert. He warned her if Alicia found out he was a Grimm, she could run back to Joe.

Later, Juliette told Alicia that she knew about Wesen and Grimms and that she was okay with it, but Alicia said she didn't know what she was talking about and that they should stop talking about it before someone said something they would regret.

Juliette told Nick that she told Alicia, and Alicia came downstairs with the exciting news that she found an apartment close by. At first, Juliette was happy, but then she started saying how ridiculous it was that she couldn't admit to being Wesen. She slipped out that Nick was a Grimm, which caused Alicia to get scared and try to run out of the house. Nick stopped her at the open door, telling her he was the same person she had always known and wouldn't hurt her. Joe walked in and sucker punched Nick in the head, knocking him to the ground. Joe went after Alicia as she ran towards the kitchen. Juliette tried to stop him, but he threw her to the ground and grabbed Alicia. Juliette ran up and jumped on Joe's back to get him to let go of Alicia and hit Joe in the head a couple times before he threw her off and woged into a Klaustreich. Juliette said she was not impressed and hit him with a frying pan, and she and Alicia kicked him on the ground a few times before Nick came in with his gun. Joe was scared that Nick was a Grimm and promised to not harm Alicia ever again. Alicia said she was sorry for not telling Juliette, but Juliette understood. Alicia then decided to show Juliette her Fuchsbau form. Juliette ran up and hugged her, and Alicia tearfully told her, "Now I don't have any secrets." 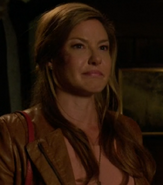 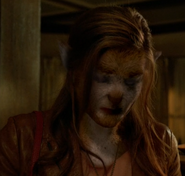 Add a photo to this gallery
Retrieved from "https://grimm.fandom.com/wiki/Alicia?oldid=199608"
Community content is available under CC-BY-SA unless otherwise noted.