Alice (née Dietrich) is a Blutbad and Monroe's mother. She first appeared in "The Wild Hunt".

Monroe called Alice and his dad, Bart, to announce his engagement. Later that day, she called Monroe and told him they were flying out to Portland the next day.

She and Bart showed up earlier than expected the next day. Though delighted to see their son, they became upset when they realized Rosalee was a Fuchsbau. Both insisted that marriages between different species of Wesen never worked. While Bart was more vocal, Alice tried to calmly persuade Monroe, who did not budge.

After Nick arrived and Bart woged to attack, she woged in support.

She and Bart were restrained by Monroe after realizing Nick was a Grimm. Although Nick apologized for punching Bart, Monroe's explanation didn't go well, and Alice and Bart stormed out of the house after delivering some scathing words.

The next morning, Monroe called his parents to set up a meeting, so Alice told him the hotel they were staying at. When Monroe arrived, their debate soon grew heated, as Monroe and Bart both nearly woged. Alice attempted to intervene, but Monroe left, saddened and angry about his parents living in the past.

Later in the day, Bart and Alice had their things packed and were getting ready to head back home, but Alice told Bart she couldn't leave yet because she didn't want to lose her son. Bart told her she could do what she wanted, but he was still leaving.

Alice went to the spice shop to talk to Rosalee. She told Rosalee she didn't want to lose Monroe, and she and Monroe had to decide for themselves what was right. Alice asked her if she'd be open to the Vertrautheiten. Rosalee asked if she thought that would actually work, and Alice said it couldn't hurt. They both woged and completed the Vertrautheiten.

Rosalee, Monroe, his parents, Nick, and Juliette all had dinner at Monroe's house. Everyone was sitting silently as they ate until Juliette brought up Monroe and Rosalee's wedding, causing Bart to woge and then the other three Wesen to follow. Nick told everyone to calm down, so they all retracted.

At the Zimmer Mountain Lodge, Alice, along with Bart, Gloria, Hank, and Bud, watched Monroe and Rosalee's wedding rehearsal from their seats. At the end of the rehearsal, Judge Mason asked Nick if he was going to be wearing his sunglasses during the wedding as well, which caused everyone in the room to all speak at once trying to make various excuses as to why Nick must wear his sunglasses.

Later, everyone from the wedding rehearsal was having a rehearsal dinner. Bart made a toast where he apologized to Monroe, Rosalee, and Nick for the way he acted when he first met Rosalee and Nick. He then thanked Alice for not leaving when he really wanted to go.

After dinner, Monroe, Rosalee, Bart, Alice, Gloria, and DeEtta all arrived at Monroe and Rosalee's home. Rosalee asked everyone if they wanted anything else before they went to bed, and everyone said no thanks except DeEtta, who mentioned she'd take more wine. Rosalee took DeEtta to the kitchen for wine while everyone else headed to bed.

In the middle of the night, there was a crash, causing everyone to get out of bed. They all entered the living room to find a very drunk DeEtta in Rosalee's wedding dress. The dress had red wine stains all over it, and DeEtta drunkenly told Rosalee she wouldn't let her get married in the dress because she'd had two failed marriages after getting married in the dress and that it was bad luck, before she passed out on the floor.

The next morning, Rosalee, Gloria, Bart, and Alice went to a bridal shop to find a new dress. The shop was not open yet, but a saleswoman was inside, and after some persuading, she let everyone in so Rosalee could get a dress, which Bart and Alice told Rosalee they would pay for as their wedding present.

Alice was among the guests who watched as Monroe and Rosalee got married. Soon after their first kiss as a married couple, Trubel came running in with the antidote for Nick, and all the Wesen at the wedding started freaking out. As Nick, Hank, Juliette, Monroe, and Rosalee got Trubel away from the crowd, Bart, Alice, and Gloria blocked the door and told everyone to calm down. 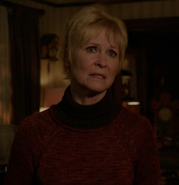 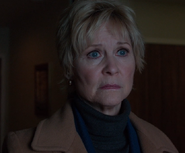