Start a Wiki
watch 01:58
'Grimm' Profile: Albert Bowden
Do you like this video?

Albert Bowden, also known as Iron Hans, is a Löwen who appeared in "Iron Hans". He is the owner of the Iron Hans Ranch.

Albert helped load some camping supplies into his van and took cell phones from the young boys that were leaving with him. He then said goodbye to his daughter, Maggie Bowden, as he drove off. Once he arrived at the camping destination, he started talking to the boys and their fathers about how they have lost touch with their past but were going to reconnect with who they really are, adding to the boys that they had a responsibility to embrace their true natures. He and Todd then led a group cheer as they all loudly repeated the chant, "To the hunt!" A boy named Elliott was then able to capture a jackrabbit with his bare hands as Albert told him to hold it up high and be proud.

Later at night, the group was cooking the rabbit over a campfire as Albert said to them that they were going to soon discover what it meant to be Wesen and that all Wesen are blessed and experience life on a deeper level than normal humans. He then said, "Now we feast from the hunt," wogeing into a Löwen as the other parents of the boys followed suit and woged as well. The boys then ate pieces of their hunt, and one of them experienced the beginning of a woge as his face rippled, much to the delight of the rest of the group.

Investigating into the death of a hitchhiker on a nearby highway, Monroe helped Nick and Hank track back to the Iron Hans Ranch. Albert introduced himself and his son. When Nick said they followed tracks up to their fence and Todd said that they didn't look like trackers, Monroe woged, and both Albert and Todd woged in response. Albert immediately recognized Nick as a Grimm he had heard about and also commented that he had heard of Monroe when he asked Monroe for his name. He introduced Nick, Hank, and Monroe to Maggie when she came over to see if everything was alright. Albert said that him and his children were all at the ranch the night before and asked Monroe about him having heard of the Iron Hans camps. When Monroe said that he had been to one when he was a kid, Albert surmised that he had accepted who he was, acknowledging that this was difficult for Blutbaden to do. When Nick said that they would like to take a look at their campsite, Albert obliged and offered to take them there in his van.

At the campsite, Albert described how he would arrive at noon to settle the groups in because it was often the first time the fathers and sons had gone camping, and the boys had not woged yet. He told Hank that Maggie could get them names of everyone that was at the campsite last night. When Nick found some blood, Albert said that the group had gone on a hunt and killed a rabbit the night before, adding that they didn't hunt people and other Wesen like their ancestors did. He sensed that Monroe had used to hunt and felt "the struggle," fascinated that he was now working with a Grimm. He then offered Monroe the chance to speak to another group later that night, who eventually accepted.

At the campsite again with the second group, Albert introduced Monroe as an "Erlangen Wieder Weidmann" and thanked him for being there. When Monroe started to get choked up during his speech to the group, he thanked him again and told the group that they would begin the hunt. During the hunt, Monroe confronted Maggie and rushed back to Albert to tell him that Maggie was on a hunt of her own. Albert, Todd, and Monroe ran to go find her, but they were too late, as Maggie had been stabbed by the person she was trying to hunt. Albert wept as Maggie died in his arms, telling him that he didn't pay enough attention to her and that he never knew how much being a part of his life and joining the hunt meant to her. 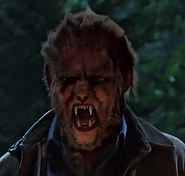 Retrieved from "https://grimm.fandom.com/wiki/Albert_Bowden?oldid=151638"
Community content is available under CC-BY-SA unless otherwise noted.