Akira Kimura was one of four Schakals who were hunting for the Coins of Zakynthos, the others being Soledad Marquesa, Hans Roth, and Ian Flynn.

Kimura had a blue ægishjálmr tattoo on the upper left side of his face and had connections with a group called the Dragon's Tongue. This snowflake-like shape is the Old Norse "helm of awe", representing invincibility. It is related to the Japanese Imperial army, which went underground upon the defeat of Japan in World War II, but has since resurfaced recently with the Yakuza. He also had tattoos of the Coins on his back, along with some Japanese script that is assumed to have confirmed his affiliation with the Dragon's Tongue. ("Bad Teeth")

In 1994, the four were all suspect to the alleged killing of Reed and Kelly Burkhardt. Until then, Kelly had been the guardian of the coins. The coins ended up in another man's hands, however, who sold them to Sam Bertram and was beaten to death by Kimura for doing so.

Akira Kimura is hunting down the Coins of Zakynthos, flying to Portland, Oregon to receive information from Nathaniel Adams, a New York private investigator. After getting what he needed, he tore Adams' throat out and went to Renard, where he trashed Renard's home in search of the coins, killed the maid Patty, and held Renard at bladepoint in a violent interrogation. Threatened by Wu's intent to enter the condo, Kimura spared Renard and made his getaway. Subsequently, Kimura trashed Hank Griffin's home and Nick Burkhardt's home, where he was caught when Nick returned home.

Kimura dodged Nick Burkhardt's crossbow bolt containing Schlaftrunk, but Nick beat him up badly and stabbed him with her switchblade, stunning him. Later, Kelly Burkhardt injected him with something to knock him out.

Kimura was arrested and sent to jail. He was later given a meal which poisoned him and killed him. It was later revealed in "Season of the Hexenbiest" that Sean Renard was responsible. 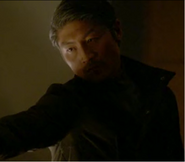 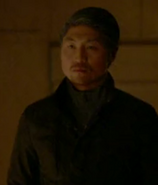 The tattoos on his back

Kimura dead
Add a photo to this gallery
Retrieved from "https://grimm.fandom.com/wiki/Akira_Kimura?oldid=50281"
Community content is available under CC-BY-SA unless otherwise noted.